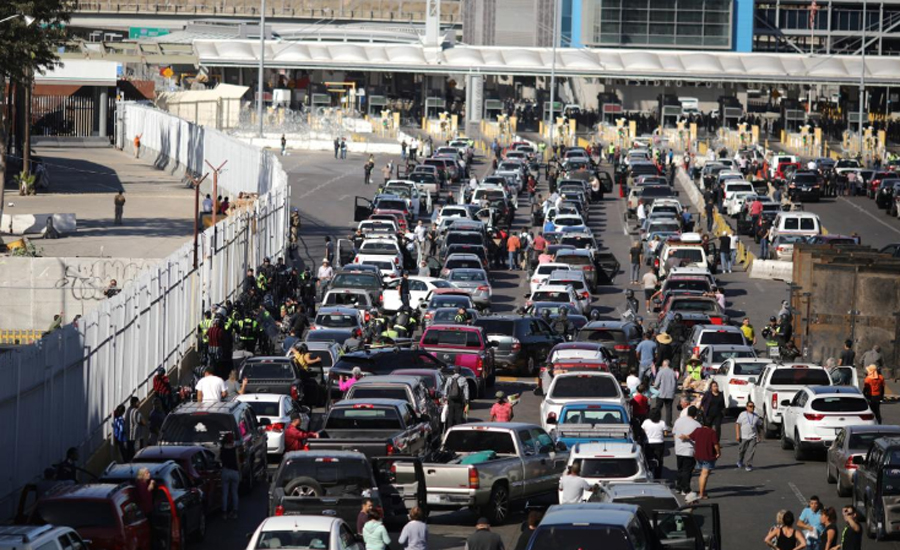 WASHINGTON (Reuters) – President Donald Trump threatened on Friday to close the southern U.S. border with Mexico unless he gets the money he wants for a wall, raising the stakes in a standoff that will present an immediate test next week for the new US Congress. When Nancy Pelosi and the Democrats take control of the U.S. House of Representatives on Thursday, they plan to quickly approve a spending measure meant to end a partial government shutdown that began on Dec. 22, triggered by Trump’s demand for $5 billion in funding for his proposed wall. Democrats have made clear that the House measure, which would then have to go to the Republican-controlled Senate, will not include $5 billion Trump says is needed for the wall, a central part of his tougher positions on immigration than his predecessors. “Democrats are united against the president’s immoral, ineffective and expensive wall ... that he specifically promised that Mexico would pay for,” Pelosi spokesman Drew Hammill said in a statement, referring to a Trump 2016 presidential campaign pledge. Trump has previously threatened to close the border to prevent Central American immigrants reaching the United States. Asked about Trump’s threat on Friday, Mexican President Andres Manuel Lopez Obrador told reporters it was an internal U.S. government matter.
Lopez Obrador added, however: “Of course we will always defend our sovereignty ... We will always protect migrants, defend their human rights.” Whether Senate Republican leader Mitch McConnell, Pelosi and Trump can find a way forward to fully reopen the government will say a lot about the next two years of divided government. A close congressional ally of Trump’s on Friday sent a tweet suggesting more partisan confrontation lies ahead. “To Nancy Pelosi and the House Democrats: No Wall Money, No Deal,” Republican Senator Lindsey Graham wrote on Twitter. The dispute over Trump’s wall has led to the shutdown of “non-essential” operations at numerous agencies because of lack of funding, including the departments of Agriculture, Homeland Security, Interior, Transportation, Commerce and Justice. Trump is demanding that Congress include his $5 billion in legislation that must be passed to restore funding to the agencies that expired at midnight on Dec. 21.
Firing off angry tweets from the White House early on Friday, the president widened his demands. “We will be forced to close the Southern Border entirely if the Obstructionist Democrats do not give us the money to finish the Wall & also change the ridiculous immigration laws that our Country is saddled with,” Trump tweeted. “Either we build (finish) the Wall or we close the Border.”

‘PROUD’ TO SHUT DOWN

Earlier this month, Trump said he would be “proud” to shut down the government over border security. But since the shutdown started, he has tried to blame Democrats. In television interviews on Friday, Trump aides said Democrats have refused to negotiate over the matter. “We’re here, and they know where to find us,” White House Chief of Staff Mick Mulvaney said in an interview with Fox News Channel. “Where is Chuck Schumer? Where is Nancy Pelosi? They’re not even talking right now,” he said.
Schumer is the top Democrat in the Senate. Pelosi’s spokesman said the White House has not reached out formally to her since Dec. 11, when she and Schumer had a contentious, televised Oval Office meeting with Trump. Pelosi is expected to become speaker of the House on Jan. 3 because Democrats won a House majority in November’s elections. Since their victory, House Democrats have talked about seeking common ground with Republicans, while also promising numerous investigations of Trump, who has painted himself and Republicans in the Senate into a political corner. Rejecting next week’s spending measure from House Democrats would put a Republican stamp on the shutdown. But accepting it would mean backing away from Trump’s proposed wall.

Pelosi and Schumer have been discussing three options for Democratic legislation, according to a senior Democratic aide. One is a stop-gap funding bill that would run through Feb. 8. Another is six full 2019 appropriations bills for all but the Department of Homeland Security, which would be funded through a measure known as a continuing resolution maintaining current funding through Sept 30. The third is a continuing resolution for all shuttered agencies that would expire on Sept 30. The aide said the legislation expected for a full House vote on Jan. 3 could be a variation on any of the three options. According to a Reuters/Ipsos poll released on Thursday, 47 percent of Americans hold Trump responsible for the shutdown, while 33 percent blame Democrats in Congress. The shutdown affects about 800,000 employees. Most of the federal government, which directly employs almost 4 million people, is unaffected. Even agencies that are affected never totally close, with “essential” workers still on the job. Trump, who scrapped plans to spend Christmas at his private resort in Florida and stayed in Washington, has now also canceled his New Year’s plans, Mulvaney said.