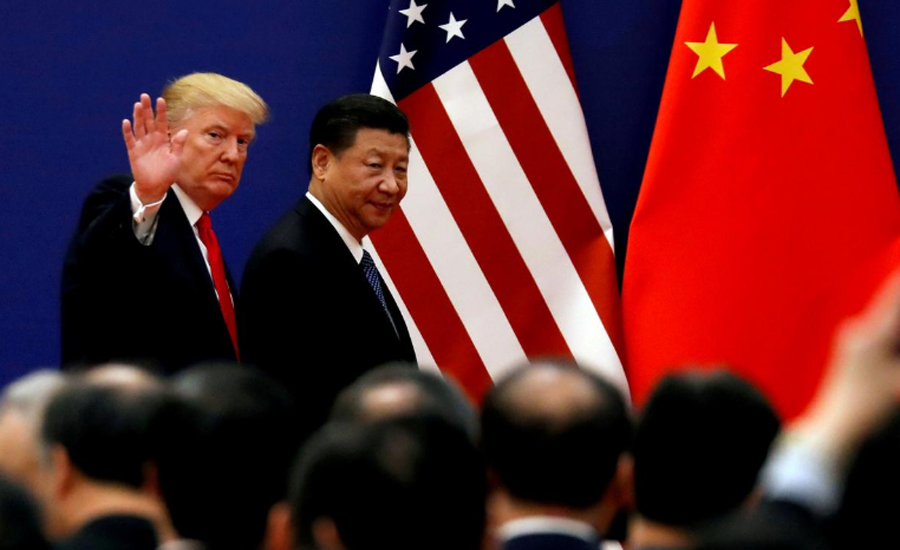 OSAKA (Reuters) – US President Donald Trump and Chinese President Xi Jinping are set for a high-stakes meeting in Japan on Saturday that could salvage trade talks or plunge the world’s two largest economies into a deeper trade war. The dispute has already cost companies in both countries billions of dollars, disrupted global manufacturing and supply lines, and roiled global markets. Trump said he would be sitting down with Xi, the first meeting between the two leaders in seven months, around noon on Saturday (0300 GMT) in Osaka, where they would discuss a dispute over Huawei Technologies Co and trade, among other topics. Trump said the two had seen each other on Friday evening at a dinner of Group of 20 leaders. “A lot was accomplished actually last night,” he said.

“The relationship is very good with China. As to whether or not we can make a deal, time will tell. But the relationship itself is really great.” The US president, however, has said he would extend tariffs to cover almost all imports from China into the United States if there was no progress from the meeting on wide-ranging US demands for economic reforms. China’s Global Times, a widely read newspaper published by the ruling Communist Party’s official People’s Daily, said on Saturday the world had to “contain capricious US actions,” pointing to examples like Trump withdrawing from the Paris climate accord. “The world needs to rein in the US, although it’s difficult,” the paper said in an editorial. “The problem is that many countries have misgivings in expressing their opposition to U.S. bullying tactics out of fear for US power, or hope to profit from the US stirring up the global order through opportunism.” The trade war and signs of a global economic slowdown have overshadowed the two-day G20 summit. The leaders of the big economies will agree on Saturday to accelerate reforms to the World Trade Organization but stop short of calling for the need to resist protectionism in their closing communique, Japan’s Nikkei newspaper said. The best outcome from the Trump-Xi talks would be a resumption of trade negotiations, Marc Short, the chief of staff for US Vice President Mike Pence, told reporters at the White House on Friday. The United States says China has been stealing US intellectual property for years, forces US companies to share trade secrets as a condition for doing business in China, and subsidizes state-owned firms so they can dominate both domestic and international business. China says the United States is making unreasonable demands and must also make concessions. “We feel the US side is exerting extreme pressure,” a Chinese diplomat told Reuters on Friday on condition of anonymity. “It is raising many demands but doesn’t want to make concessions.” The dispute escalated when talks collapsed in May after Washington accused Beijing of reneging on reform pledges. Trump raised tariffs to 25% from 10% on $200 billion (£157.5 billion) of Chinese goods, and China retaliated with levies on U.S. imports. As relations between the two countries have soured, the dispute has spread beyond trade. The US administration has declared Chinese telecommunications giant Huawei a security threat, effectively banning US companies from doing business with it. US officials have also put pressure on other governments worldwide to drop Huawei from plans for fifth generation, or 5G, network development. Trump has suggested easing US restrictions on Huawei could be a factor in a trade deal with Xi. China has demanded the US drop the restrictions, and said Huawei presents no security threat. Several G20 leaders warned on the first day of the summit on Friday that growing Sino-US trade friction was threatening global growth. “The trade relations between China and the United States are difficult, they are contributing to the slowdown of the global economy,” European Commission President Jean-Claude Juncker told a news conference.