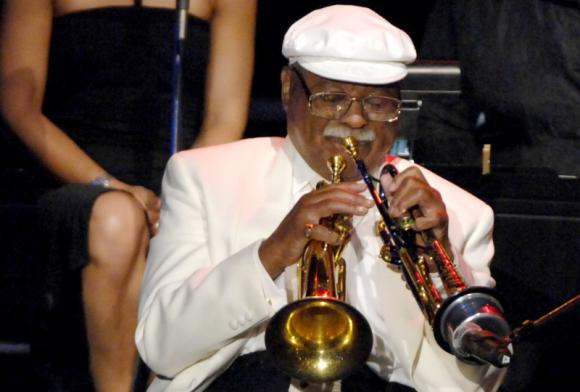 CALIFORNIA (Reuters) - Clark Terry, a Grammy award-winning trumpet player and composer who recorded with greats such as Billie Holiday, Ella Fitzgerald and Quincy Jones, has died aged 94, his wife said on Sunday. Terry, who had gone into hospice care after suffering from diabetes, "has joined the big band in heaven where he'll be singing and playing with the angels", Gwen Terry said on the musician's Facebook `page. "He left us peacefully, surrounded by his family, students and friends." Born in St. Louis, Missouri, Terry won fame after serving several years in the navy, playing with Count Basie and Duke Ellington from the late 1940s through the 1950s, before joining The Tonight Show band, where he played under its famed bandleader Doc Severinsen. According to his website, Terry is one of the most recorded musicians in the history of jazz, with more than 900 recordings with names such as Oscar Peterson, Dizzy Gillespie, Dinah Washington, Aretha Franklin, Ray Charles, Billy Strayhorn and Thelonious Monk. Terry also headed up his own bands, including Clark Terry’s Big Bad Band and Clark Terry’s Young Titans of Jazz. In 2010 Terry was presented a Lifetime Achievement Grammy award. He was also nominated for Grammys, the music industry's top honor, three times. Among many other honors, the French and Austrian governments presented Terry their Arts and Letters Awards, and he was knighted in Germany. In his later years, Terry directed his attention toward music education. Terry published his autobiography, "Clark: The Autobiography of Clark Terry", in 2011.