Tsipras returns to power to fight for Greek debt relief 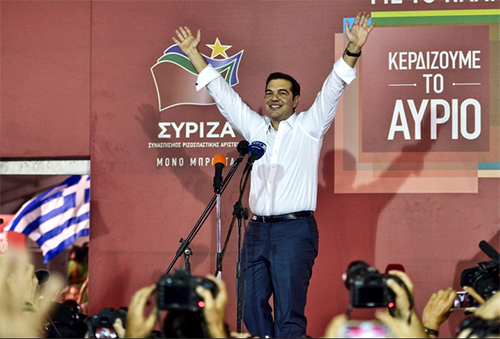 Tsipras returns to power to fight for Greek debt relief

ATHENS - Greek leftist leader Alexis Tsipras will return as prime minister on Monday determined to secure debt relief from the country's creditors in his "first and most important battle" after scoring an unexpectedly clear election victory. But easing Greece's debt burden is just one of many items on a dauntingly long "to do" list ranging from how to revive a crippled economy while implementing austerity polices to dealing with the wave of migrants landing on Greek shores. In Sunday's election voters gave Tsipras and his Syriza party a second chance to tackle Greece's problems, despite his summer U-turn when he ditched his anti-austerity platform to secure a new bailout deal and avert 'Grexit' - a Greek exit form the euro zone. The extent of the win means that, rather than needing a patchwork of partners, Syriza will be able to govern with only a single ally, the Independent Greeks. The small right-wing party was also the junior partner in the Tsipras coalition which governed for seven turbulent months until he resigned last month, forcing the election. With society fractured by years of austerity, Tsipras wants to build a broader consensus as he tries to steer Greece through the tough reforms demanded by the euro zone in the bailout agreement - the country's third. A presidency source said Tsipras would be sworn in on Monday afternoon. Initially, negotiating debt relief will dominate his agenda, a senior Syriza source said. "We will continue negotiations in the coming period, with the debt issue being the first and most important battle," the party source said. "We will ask all political forces to support our efforts." Tsipras - along with most Greek political leaders and many international economists - argues that the country cannot recover from years of crisis without easing its huge debt burden. In his victory speech to cheering Athens crowds late on Sunday, Tsipras promised a new phase of stability in a country that has held five general elections in six years but did not mention the 86 billion euro ($97 billion) bailout. However, Syriza campaigned on a pledge to implement the programme, which includes more tax rises and pensions cuts, while promising to introduce measures to protect vulnerable groups. With the first review of the bailout programme due next month, Tsipras must work fast to oversee a recapitalisation of the country's banks - closed for three weeks at the height of the summer crisis and still subject to capital controls - while trying to stave off a recession and tackling the migrant crisis. His first international summit is on Wednesday in Brussels to discuss the hundreds of thousands of refugees and migrants pouring into Europe, many via Greek islands that border Turkey. In a reminder of that crisis, 13 migrants died in Turkish waters on Sunday when a boat carrying 46 people en route to Greece collided with a cargo vessel and capsized, a Turkish coast guard source said. EMBOLDENED In a financial market that looked to have factored in a Syriza win, Greek shares lost ground on Monday and government bond yields edged higher - mirroring a generally cautious reaction elsewhere to Tsipras's second incarnation as leader. European Council President Donald Tusk said many of the biggest problems facing the European Union were the same as Greece's - the refugee crisis and creating economic growth and jobs. "I trust that Greece, with your new government will contribute constructively in seeking solutions to all those challenges," he said in a letter to Tsipras. Tsipras plans to form a national council for European policy, including representatives of parties other than Syriza and the Independent Greeks and which would advise the finance minister, the Syriza source said. Centre-left daily newspaper Ethnos on Monday tipped Euclid Tsakalotos, the former finance minister who brokered terms of the bailout accord in August, to be re-appointed. Citigroup economist Giada Giani said the risk remained that Greece - having flirted with Grexit during fraught bailout negotiations in the spring and early summer - might still leave the euro zone. JP Morgan analyst Malcolm Barr said Tsipras was likely to feel emboldened by the election result, which "provides a platform upon which Syriza will continue to challenge significant parts of the (bailout) programme". Some form of restructuring of Greece's euro zone debt should be in place by the end of March, he wrote in a note. Some European governments, particularly Germany, are opposed to writing off part of Greece's debt - a so-called haircut - but not averse to stretching out its repayment schedule. Ralph Brinkhaus, a senior parliamentary ally of German Chancellor Angela Merkel, urged Tsipras to stick to the reform agenda and implement the bailout measures. Euro zone officials told Reuters last week that governments are ready to cap Greece's annual debt-servicing costs at 15 percent of its economic output over the long term. That would mean the nominal payment would be lower if the Greek economy struggled, higher if it was more robust, they said. -Reuters