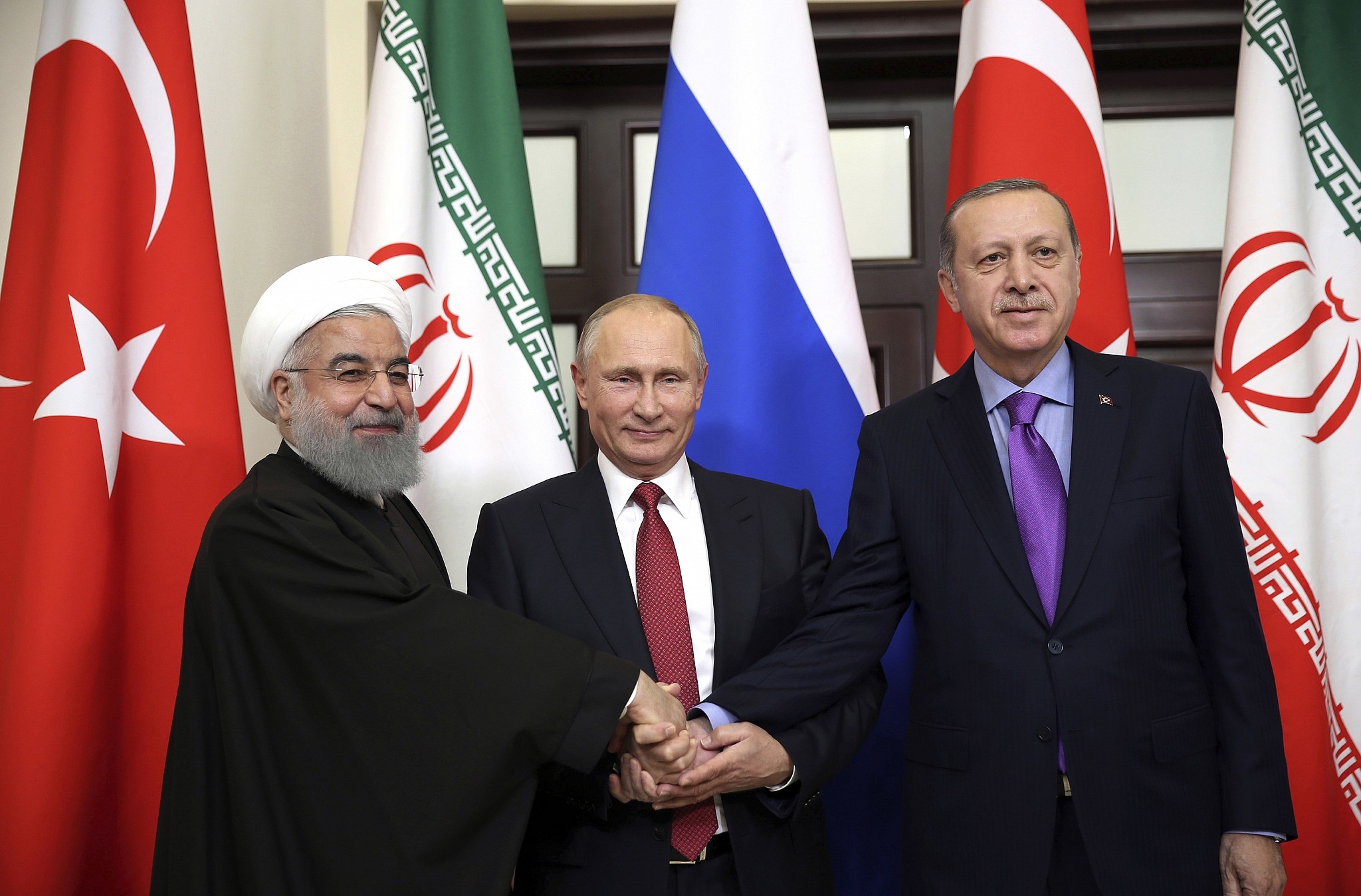 ANKARA (AFP) - The presidents of Iran, Turkey and Russia meet on Wednesday for their second tripartite summit in under six months, aiming to speed the peace process for Syria and bolster their influence in the country.

Turkish President Recep Tayyip Erdogan will host his Russian and Iranian counterparts Vladimir Putin and Hassan Rouhani in Ankara for a meeting that could have a critical bearing on developments in Syria.

The meeting will be the second such tripartite summit after the first hosted by Putin in November in the Black Sea city of Sochi and will be a new symbol of the increasingly deep cooperation.

The three powers have backed peace talks in the Kazakh capital Astana which they argue are a parallel process to support UN-supported discussions in Geneva.

Experts say that Ankara, Moscow and Tehran have quite different interests but have for now decided to team up to take advantage of the waning Western influence in Syria.

Hours before the summit, US President Donald Trump said he wanted to "bring our troops back home" from Syria after indicating last week the US would withdraw from the country "very soon".

Jana Jabbour, professor of political science at Sciences Po university in Paris, said the aim of the summit was to "reorganise and renegotiate the zones of influence in Syria as well as to reflect on the future of Syria's north after US withdrawal".

Turkey drove out Kurdish militia from Afrin city on March 18, two months after it launched an offensive in northern Syria supporting Syrian rebels.

Erdogan has indicated Turkey could extend its operation to the YPG-held town of Manbij as well as Ayn al-Arab (Kobane) and Qamishli, all east of Afrin.

"Erdogan likely wants to use the summit to secure Russian and Iranian support for expanded operations in northern Syria or Iraq," said Elizabeth Teoman, Turkey analyst at the Institute for the Study of War (ISW).

After bilateral talks with Putin on Tuesday, Erdogan said Turkey and Russia would continue their cooperation "focusing on our common interests" in Syria.

Jabbour said Iran and Russia would give free rein to Turkey in the north against the YPG in exchange for bringing the groups it controls to the negotiating table.

"Turkey remains a key player in the Syrian crisis especially because of the opposition groups it controls. A solution to the crisis is unimaginable without Ankara's contribution," she added.

While Moscow and Tehran support the regime of Syrian President Bashar al-Assad politically and militarily, Turkey has repeatedly called for his removal and supported Syrian opposition fighters.

Last year, the powers agreed to set up "de-escalation areas" in western Idlib province, north of Homs province, parts of Deraa and Quneitra provinces in southern Syria and Eastern Ghouta near Damascus, which has come under heavy bombardment.

Cooperation between the three in Syria "may break down at some point", Teoman warned, while issues between Moscow and Turkey could come to the fore over Idlib.

Turkey is keen to prevent a Russia-backed regime assault on the province home to around 2.5 million people who analysts say would have few places to flee after having already fled areas like Ghouta and Aleppo.

Turkish armed forces have now set up eight observation posts to keep the ceasefire intact but Moscow wants Ankara to also exert influence over the jihadists in control of Idlib.

Teoman said that tensions between Russia and Turkey "will flare up again when the pro-regime coalition refocuses on Idlib province."

Tensions may also be emerging behind the scene between Russia and Iran, with Moscow much more concerned to press for reform under Assad than Tehran.

More than 340,000 people have been killed since the war began following anti-government protests in 2011, while millions have been internally displaced or forced to flee.

Turkey hosts over 3.5 million Syrian refugees and Ankara is keen to avoid a further influx ahead of 2019 elections and also wants to install some refugees in safe zones inside Syria.