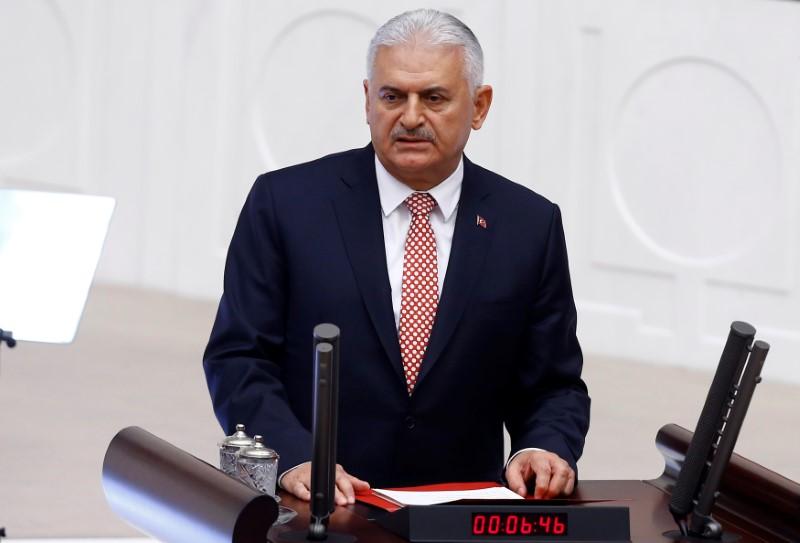 NICOSIA (Reuters) - Turkish Prime Minister Binali Yildirim on Thursday warned Cyprus its moves to explore for energy around the eastern Mediterranean were "untimely and dangerous", adding that Ankara would continue to protect the rights and interests of Turkish Cypriots.

Ankara has said it will take measures against Cyprus for engaging in gas and oil exploration around the divided island, arguing it has no jurisdiction to explore for hydrocarbons.

"Turkey thinks there is an opportunity for cooperation on energy resources in the eastern Mediterranean but the unilateral steps by the Greek Cypriot side are untimely, dangerous and encourage a deadlock," Yildirim said.

The tensions over energy exploration flared up after talks to reunify the island collapsed on July 7, marking the end of a process seen as the most promising in generations to heal the conflict.

"Steps to end the unjust, baseless restrictions imposed on the Turkish Cypriot people must be taken without delay," Yildirim said.

He was speaking at a ceremony in Nicosia to mark the 43rd anniversary of what Turkey calls the "Cyprus Peace Operation" of July 20, 1974, when Turkish troops invaded the north of the island in response to a brief Greek-inspired coup.

Air raid sirens wailed over the south of Cyprus at dawn on Thursday, marking the hour Turkish forces landed.

Turkey last week sent two ships and a submarine to monitor the "West Capella" drilling vessel, which was contracted by France's Total and Italy Eni, moved into position in the eastern Mediterranean to start exploring for gas.

The Turkish military said on Wednesday its vessels' monitoring activities in the region were continuing.