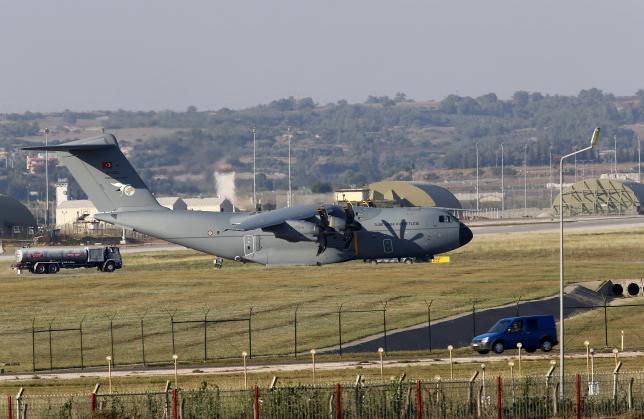 ISTANBUL/BEIRUT – Turkey said on Wednesday a US-led coalition will soon launch a "comprehensive battle" against Islamic State militants from Turkish air bases, but Syria said any military action not coordinated with Damascus would breach its sovereignty. NATO-member Turkey formally agreed to open its air bases to U.S. and coalition aircraft last month, a major policy change after years of reluctance in taking a frontline role against the Islamist fighters pressing on its borders. Ankara and Washington have been working on plans to provide air cover for a group of US-trained Syrian rebels and jointly sweep Islamic State from a strip of territory stretching about 80 km (50 miles) along the Turkish frontier. "As part of our agreement with the U.S. we have made progress regarding the opening up of our bases, particularly Incirlik," Foreign Minister Mevlut Cavusoglu told state broadcaster TRT, referring to a major air base near the southern city of Adana. "We're seeing that manned and unmanned American planes are arriving and soon we will launch a comprehensive battle against Islamic State all together," he said during a trip to Malaysia. Syrian Foreign Minister Walid al-Moualem was quoted by state television on Wednesday as saying Syria supported efforts to combat Islamic State provided they were coordinated with Damascus. "For us in Syria there is no moderate opposition and immoderate opposition. Whoever carries weapons against the state is a terrorist," he was quoted as saying during a visit to ally Iran, adding Damascus had been informed about the presence of the US-trained rebels. "The United States contacted us before they sent in this group and said they are fighting against Daesh (Islamic State) and not the Syrian army at all," he said. "We said we support any effort to combat Daesh in coordination and consultation with the Syrian government, otherwise it will be a breach of Syrian sovereignty." Diplomats familiar with the coalition plans say cutting off Islamic State's access to the Turkish border, over which foreign fighters and supplies have flowed, could be a game-changer in the fight against the insurgents. The core of the US-trained rebels, who number fewer than 60, will be highly equipped and be able to call in close air support when needed, they say. But there are major challenges. Washington said on Tuesday it had indications some of the rebels trained by its military were captured by fighters from al Qaeda's Syria wing, Nusra Front, underscoring the vulnerability of a group only deployed to the battlefield in recent weeks. Turkey is meanwhile distrustful of the Syrian Kurdish YPG militia, which has proved a useful U.S. ally in fighting Islamic State, and which controls adjacent territory. Ankara wants the Kurdish guerrillas to advance no further than the Euphrates river, on the eastern fringe of the planned "safe zone". COALITION FORCES Turkey launched several air strikes against Islamic State fighters in northern Syria just under two weeks ago after one of its soldiers was killed in cross-border fire. It also carried out near-simultaneous attacks on camps belonging to the PKK Kurdish militant group in northern Iraq. Opponents have accused President Tayyip Erdogan of using the war against Islamic State as a cover for preventing Kurdish gains, pointing out the air strikes against the PKK have so far been heavier than those against the Islamist radicals. Turkish officials deny the campaign against Islamic State is a cover, saying the offensive is a joint operation with the coalition and will only begin in earnest when Washington and its allies are ready. "There are other countries within the coalition ... interested in joining such as Britain and France, while among the countries in the region, there is a possibility that Saudi Arabia, Qatar and Jordan will take part," Cavusoglu said. "Islamic State poses the biggest threat to Turkey both because it is right on the other side of our border and also due to the flow of foreign fighters. It has to be eliminated." Islamic State has seized large parts of Syria and neighboring Iraq in its drive to create a caliphate. Erdogan has said the "safe zone" created by pushing out Islamic State could allow 1.7 million refugees in Turkey to start going home. US officials say this is not the main aim, while the United Nations has warned against calling it a "safe zone" unless the protection of civilians can be guaranteed. –Reuters