Turkey says ready to help any US initiative to capture Raqqa 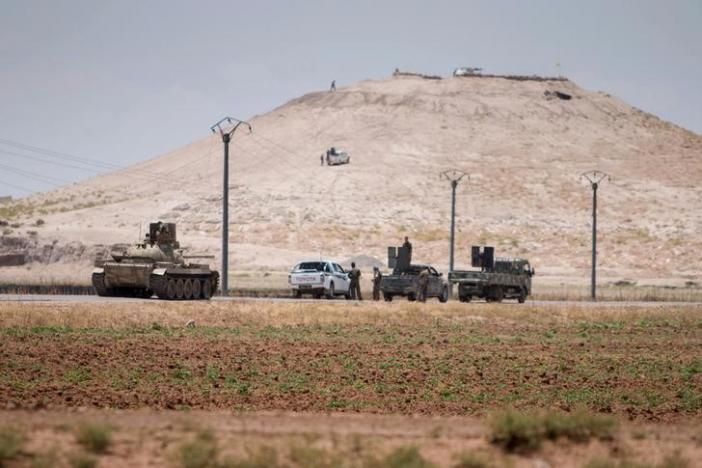 Turkey says ready to help any US initiative to capture Raqqa

ISTANBUL – Turkey would be ready to join any initiative proposed by the United States to capture an Islamic State stronghold in Syria, President Tayyip Erdogan said in remarks published on Wednesday, as Turkish-backed forces took more Syrian land from jihadists.
Obama floated the idea of joint action with Turkey to capture Raqqa during talks between the two leaders at a G20 summit in China, Erdogan said, according to Wednesday's edition of Turkey's Hurriyet daily. Turkey launched an offensive in northern Syria on Aug. 24 to clear Islamic State from its border and to prevent territorial gains by the Kurdish YPG militia, which Ankara believes has links to Kurdish insurgents fighting on its soil. "Obama wants to do some things together concerning Raqqa in particular," Erdogan told reporters on his plane that arrived early on Tuesday, referring to Islamic State's de facto capital. He was speaking after meetings in China with Obama, Russian President Vladimir Putin and other world leaders. "We stated that would not be a problem from our perspective. We said, 'Let our soldiers come together, whatever is necessary will be done'," the Turkish president said, adding that a specific Turkish role would depend on further talks. U.S. officials have welcomed Turkish efforts to dislodge Islamic State from Syrian strongholds but voiced concern when Turkish troops engaged fighters aligned to the YPG, a force Washington sees as a valuable ally in battling jihadists. Turkish-backed forces clashed with YPG fighters in the initial stages of the two-week old Turkish incursion into Syria, but have since shifted their focus onto territory held by Islamic State and captured a string of villages. Turkey's military said late on Tuesday that three Turkish soldiers were killed when two tanks were hit by rockets fired by Islamic State. Four others were wounded, it said. The military also said the Free Syrian Army, a loose-knit rebel force backed by Turkey, had taken six more villages, also located in Islamic State-held areas. Turkey and its rebel allies now control a 90-km stretch of land on the Syrian side of the border and are pushing south. Ankara wants international support to take control of a rectangle of territory stretching about 40 km into Syria, creating a buffer between two Kurdish-held cantons to the east and west and against Islamic State to the south. Turkey says such a "safe zone" would help stem the flood of Syrian refugees. But the idea has yet to gain traction from the United States and Russia, both engaged in Syria, because of the military demands of policing such a zone. Turkey, meanwhile, has been sending more military hardware south. The army sent 15 more tanks to the Islahiye district near the border, bringing the total number of tanks and armored vehicles in that area to 90, Dogan news agency reported. "We do not have the chance to take a backward step. If we take a backward step terror groups like Daesh, PKK, PYD and YPG will settle there," Erdogan said, according to Hurriyet. Daesh is another term for Islamic State, while the PYD is the political wing of Kurdish YPG militia, which Ankara says is an extension of Turkey's outlawed PKK, a Kurdish militant group that is fighting for autonomy in Turkey's southeast. –Reuters