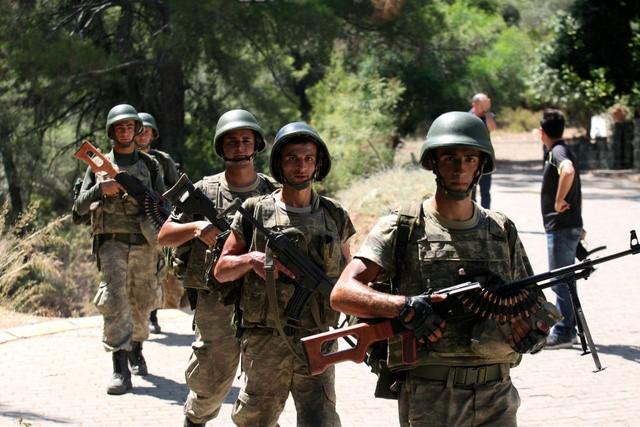 ANKARA/ISTANBUL – President Tayyip Erdogan angrily rejected Western criticism of purges under way in Turkey's military and other state institutions after a failed coup, suggesting some in the United States were on the side of the plotters. The purges target supporters of U.S.-based Muslim cleric Fethullah Gulen, accused by Ankara of masterminding the July 15-16 coup. Turkey's Western allies condemned the coup, in which at least 246 people were killed and more than 2,000 injured, but they have been rattled by the scale of the crackdown. The director of U.S. national intelligence, James Clapper, said on Thursday the purges were harming the fight against Islamic State in Syria and Iraq by sweeping away Turkish officers who had worked closely with the United States. The head of U.S. Central Command, General Joseph Votel, said he believed some of the military figures whom the United States had worked with were in jail. Speaking at a special forces headquarters in Ankara badly damaged by violence on the night of the coup, Erdogan on Friday condemned Votel's remarks. "Instead of thanking this country which repelled a coup attempt, you take the side of the coup plotters. The putschist is in your country already," Erdogan said, referring to Gulen, who denies any involvement in the coup attempt. "They (the critics) say ... 'we worry for (Turkey's) future'. But what are these gentlemen worried about? Whether the numbers of detained and arrested will increase? If they are guilty, they will increase," said Erdogan, who narrowly escaped capture and possible death on the night of the coup. Ankara wants Washington to extradite Gulen, once a close ally of Erdogan and now an arch foe, to Turkey. Asked about the U.S. comments on losing Turkish interlocutors, Turkish Prime Minister Binali Yildirim echoed Erdogan's feisty tone: "This is a confession. If the Gulenist generals are their friends, they are in the same class." Yildirim also said Turkey would shut down an air base near Ankara which served as a hub for the coup plotters as well as all military barracks used by them. MILITARY SHAKE-UP Turkey announced late on Thursday a major shake-up of its armed forces, NATO's second largest, with the promotion of 99 colonels to the rank of general or admiral and the dishonorable discharge of nearly 1,700 military personnel over their alleged roles in the coup. About 40 percent of all generals and admirals have been dismissed since the coup. Defence Minister Fikri Isik told broadcaster NTV on Friday the shake-up in the military was not yet over, adding that military academies would now be a target of "cleansing". The purges have also hit government ministries, schools and universities, the police, civil service, media and business. The number of public sector workers removed from their posts since the coup attempt now stands at more than 66,000, including some 43,000 people in education, the state-run Anadolu news agency reported on Friday. Interior Minister Efkan Ala said more than 18,000 people had been detained over the failed coup, and that 50,000 passports had been canceled. The labor ministry said it was investigating 1,300 staff over their possible involvement. Erdogan says Gulen harnessed his extensive network of schools, charities and businesses, built up in Turkey and abroad over decades, to create a secretive "parallel state" that aimed to take over the country. Erdogan's critics say he is using the purges to crack down indiscriminately on dissent and to tighten his grip on power. With long land borders with Syria and Iraq, Turkey is a central part of the U.S.-led military operation against Islamic State. As home to millions of Syrian refugees, it is also the European Union's partner in a deal reached last year to halt the biggest flow of migrants into Europe since World War Two. Turkey hosts U.S. troops and warplanes at Incirlik Air Base, from which the United States flies sorties against Islamic State militants in Iraq and Syria. Those air operations were temporarily halted following the coup attempt. Attempting to reassure the United States, Foreign Minister Mevlut Cavusoglu said on Friday that Turkey's armed forces, "cleansed" of their Gulenist elements, would prove more "trustworthy ... and effective" allies against Islamic State. Nevertheless, there is a growing anti-U.S. mood in Turkey which is likely to harden further if Washington refuses to extradite Gulen. Several hundred flag-waving protesters staged a peaceful protest march near the Incirlik base on Thursday, chanting "Allahu Akbar" (God is greatest) and "Damn the U.S.A", the pro-government Yeni Safak newspaper reported. The protesters burned a U.S. flag. "POWER POISONING" The crackdown on Gulenists pressed on unabated on Friday. In the central city of Kayseri, a stronghold of Erdogan's ruling Islamist-rooted AK Party, police detained the chairman of furniture-to-cables conglomerate Boydak Holding and two company executives as part of the investigation into the "Gulenist Terror Group", Anadolu reported. Prosecutors in the Aegean coastal city of Izmir issued orders to detain 200 police on Friday as part of the investigation targeting Gulenists, the Dogan news agency said. In the Netherlands, a spokeswoman for the Gulenist community said supporters feared for their safety after dozens of death threats and acts of arson and vandalism in Dutch towns and cities in the past two weeks. Saniye Calkin said supporters in neighboring Germany were reporting similar incidents. Germany is home to Europe's largest Turkish diaspora, while the Netherlands also has around half a million ethnic Turks. Gulen, who has lived in self-imposed exile in the U.S. state of Pennsylvania since 1999, again maintained his innocence during an interview with Italy's Corriere della Sera newspaper, saying he had himself suffered from previous coups in Turkey. Asked why his once-warm ties with Erdogan and the AK Party had turned sour, Gulen said: "It appears that after staying in power for too long, (they) are suffering from power poisoning." Gulen, whose Hizmet (Service) movement stresses the need to embrace scientific progress and inter-faith dialogue, said he still strongly backed Ankara's bid to join the EU, saying this would buttress democracy and human rights in Turkey. –Reuters