Turkey to send troops to Libya at Tripoli's request: Erdogan 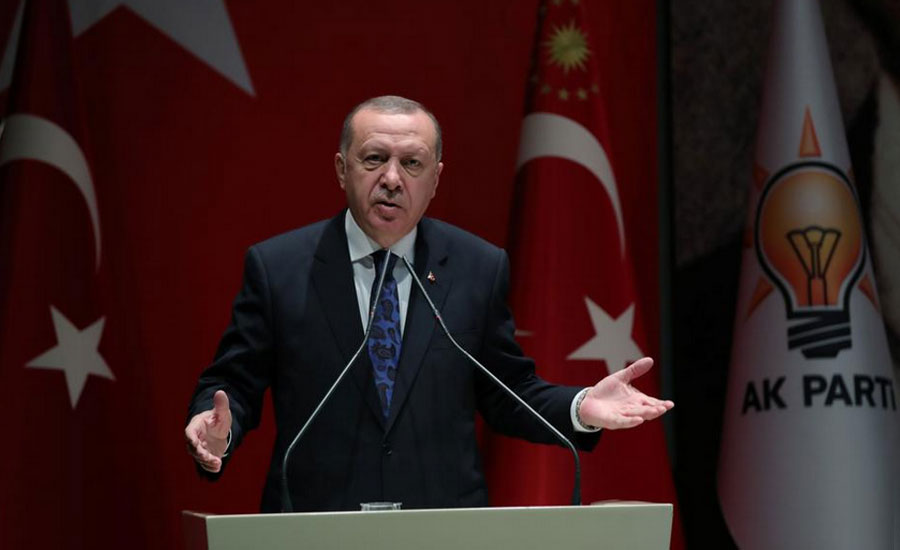 Turkey to send troops to Libya at Tripoli's request: Erdogan

ANKARA (Reuters) - Turkey will send troops to Libya at the request of Tripoli as soon as next month, President Tayyip Erdogan said on Thursday, putting the North African country’s conflict at the centre of wider regional frictions. Libya’s internationally recognised Government of National Accord (GNA) has been struggling to fend off General Khalifa Haftar’s forces from eastern Libya, which have been supported by Russia, Egypt, the United Arab Emirates (UAE) and Jordan. It was unclear what specific invitation Erdogan was referring to as the interior minister in the Tripoli-based government, Fathi Bashagha, suggested in comments to reporters in Tunis that no official request had yet been made. “If the situation escalates and then we have the right to defend Tripoli and its residents ... we will submit an official request to the Turkish government to support us militarily so we expel the ghost of mercenary forces,” Bashagha said on Thursday. Haftar’s forces were not immediately available for comment. They have failed to reach the centre of Tripoli but have made small gains in recent weeks in some southern suburbs of the capital with the help of Russian and Sudanese fighters, as well as drones shipped by the UAE, diplomats say. The Chinese-made drones have given Haftar “local air superiority” as they can carry over eight times the weight of explosives than the drones given to the GNA by Turkey and can also cover the whole of Libya, a UN report said in November. Last month, Ankara signed two separate accords with the GNA, led by Fayez al-Serraj, one on security and military cooperation and another on maritime boundaries in the eastern Mediterranean.
The maritime deal ends Turkey’s isolation in the East Mediterranean as it ramps up offshore energy exploration that has alarmed Greece and some other neighbours. The military deal would preserve its lone ally in the region, Tripoli. “Since there is an invitation (from Libya) right now, we will accept it,” Erdogan told members of his AK Party in a speech. “We will put the bill on sending troops to Libya on the agenda as soon as parliament opens.” The legislation would pass around Jan. 8-9, he said, opening the door to deployment.

For weeks Ankara has flagged the possibility of a military mission in Libya, which would further stretch its armed forces less than three months after it launched an incursion into northeastern Syria against a Kurdish militia. Turkey has already sent military supplies to the GNA despite a United Nations arms embargo, according to a UN report seen by Reuters last month. Erdogan visited Tunisia on Wednesday to discuss cooperation for a possible ceasefire in neighbouring Libya. On Thursday, he said Turkey and Tunisia had agreed to support the GNA. Moscow has voiced concerns over a possible Turkish military deployment to Libya in support of the GNA. Erdogan has said Turkey will not stay silent over mercenaries from the Kremlin-linked Wagner group supporting Haftar. “Russia is there with 2,000 Wagner (fighters),” Erdogan said on Thursday, also referring to some 5,000 fighters from Sudan in Libya. “Is the official government inviting them? No.” “They are all helping a war baron (Haftar), whereas we are accepting an invitation from the legitimate government of the country. That is our difference,” he said. Haftar’s Libyan National Army has been trying since April to take Tripoli from the GNA, which was set up in 2016 following a UN-brokered deal. The UAE, Egypt and Jordan have for years provided military support for Haftar’s forces, UN reports have said. None of the countries has confirmed this. Russian mercenaries have put more pressure on the GNA and “accelerated this quid pro quo between Tripoli and Ankara,” said Sinan Ulgen, a former Turkish diplomat and chairman of the think-tank Center for Economics and Foreign Policy Studies. “So the troop deployment must happen right away, but the risk is that Turkey is being sucked into a military game where the only path is more engagement and escalation,” he said. Turkish and Russian officials held talks in Moscow this week to seek a compromise on the issues of both Libya and Syria, where Russia backs President Bashar al-Assad. In the Mediterranean, Turkey is at loggerheads with Greece, Cyprus, Egypt and Israel over rights to resources off the coast of the divided island of Cyprus. Athens says Ankara’s maritime deal with Tripoli violates international law.