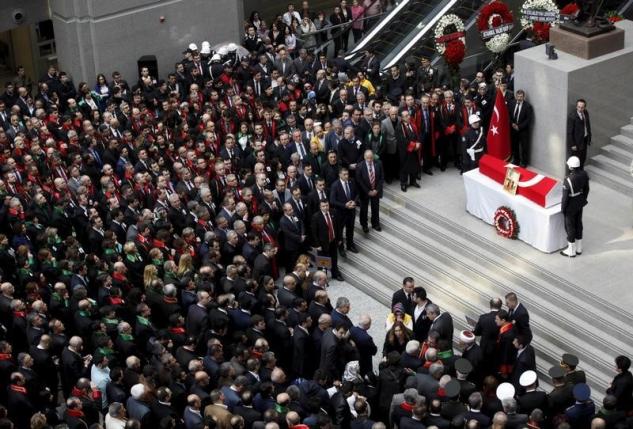 ISTANBUL - Turkey's justice minister said on Wednesday two militants who seized an Istanbul prosecutor had "held a gun to the nation" and vowed to find the "dark forces" behind them, after all three died in a police rescue attempt. Two members of the extreme leftist Revolutionary People's Liberation Party-Front (DHKP-C) took prosecutor Mehmet Selim Kiraz, 46, hostage in his Istanbul office on Tuesday. Kiraz had been leading an investigation into the death last March of Berkin Elvan, 15, who died nine months after falling into a coma after being hit by a police tear gas canister during anti-government protests in 2013. The hostage-taking was in revenge for his death, the DHKP-C said on its website. "We don't see this as an attack on our deceased prosecutor, but on the whole justice system. It is a gun directed at our nation," Justice Minister Kenan Ipek said at a ceremony attended by hundreds of lawyers and judges. "Our state is powerful enough to track down those behind these lowlifes ... The fact these assassins are dead shouldn't put those nefarious and dark forces at ease," he said, as Kiraz's coffin stood on display in the courthouse foyer. One mourner, a 49-year-old lawyer who gave his name as Serpil, said the prosecutor should have had better security. "Perhaps the police could have negotiated with them longer," he added. Separately, police detained a gunman on Wednesday who entered a suburban Istanbul office of the ruling AK party and hung from its window a Turkish flag with the emblem of a sword added to it. "AXIS OF EVIL" DHKP-C sympathizers clashed with police in two Istanbul neighborhoods overnight, local media reported. Counter-terrorism police have raided homes of suspected members and detained more than two dozen people in three provincial cities. Riot police detained 36 students at Istanbul University after posters referring to one of the dead hostage takers was hung in the law faculty, a leftist union said on its website. "We are aware that we face an axis of evil and there is an attempt to instigate an atmosphere of chaos ahead of the (June general) election," Prime Minister Ahmet Davutoglu told reporters in Istanbul. Deputy Prime Minister Emrullah Isler accused the hostage-takers on Twitter of links to groups that incited violence during the 2013 unrest in which Elvan was injured. Newspapers last month reported that prosecutor Kiraz had identified three police officers involved in Elvan's death and was close to finishing his investigation. The DHKP-C is a Marxist group that has been behind a series of assassinations and suicide bombings, including fatal attacks on the US Embassy. Turkish police have also been a frequent target. The United States, European Union and Turkey list it as a terrorist organization. - Reuters