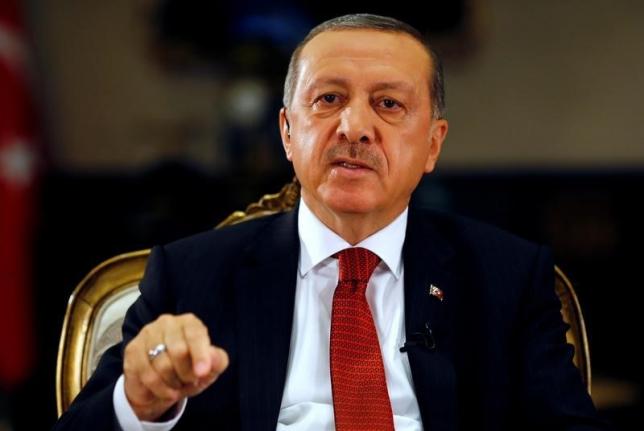 ISTANBUL – President Tayyip Erdogan tightened his grip on Turkey on Saturday, ordering the closure of thousands of private schools, charities and other institutions in his first decree since imposing a state of emergency after the failed military coup. A restructuring of Turkey's once untouchable military also drew closer, with a planned meeting between Erdogan and the already purged top brass brought forward. In the decree, published by the Anadolu state news agency, Erdogan extended to a maximum of 30 days from four days the period in which some suspects can be detained. It said this was to facilitate a full investigation into the coup attempt. Erdogan, who narrowly escaped capture and possible death during the July 15 coup attempt, told Reuters in an interview on Thursday he would restructure the armed forces and bring in "fresh blood". Turkey's Supreme Military Council (YAS) will meet under Erdogan's supervision on July 28, a few days earlier than originally planned, private broadcaster NTV reported, a sign that the president wants to act fast to ensure the armed forces are fully under the government's control. Reinforcing that message, the YAS meeting - which usually takes place every August - will be held this time in the presidential palace, not as is customary at the headquarters of the military General Staff. Erdogan has accused U.S.-based Muslim preacher Fethullah Gulen, who has many followers in Turkey and abroad, of masterminding the failed coup, in which at least 246 people were killed. Gulen denies the charge and has condemned the coup. PURGES Erdogan declared the state of emergency late on Wednesday saying it would enable authorities to swiftly and effectively root out supporters of the coup. The state of emergency allows the president and government to pass laws without first having to win parliamentary support and also allows them to curb or suspend rights and freedoms as they deem necessary. Turkish authorities have already launched a series of mass purges of the armed forces, police, judiciary and education system, targeting followers of Gulen, who operates an extensive network of schools and charitable foundations. The first decree signed by Erdogan authorises the closure of 1,043 private schools, 1,229 charities and foundations, 19 trade unions, 15 universities and 35 medical institutions over suspected links to the Gulen movement, the Anadolu agency said. Parliament must still approve the decree but requires only a simply majority, which the ruling AK Party founded by Erdogan and in power in Turkey since 2002 commands. In an address to lawmakers late on Friday Erdogan vowed to bring to justice supporters of the Gulenist "terrorist" movement and he urged Turks to continue attending rallies in major cities in support of democracy and against the coup plotters. Turkey expects to complete within a week to 10 days a dossier requesting Gulen's extradition from the United States, Foreign Minister Mevlut Cavusoglu told private broadcaster NTV in an interview. Cavusoglu said the link between soldiers involved in the abortive coup and Gulen's extensive network of followers was "very clear", adding that Turkey would do all it could "politically and legally" to secure his extradition. Washington has said Ankara needs to provide clear evidence of Gulen's involvement before it can agree to extradite him. Lawyers say the process could take many years. On Friday evening Erdogan held his first meeting since the coup with the head of the national intelligence agency, Hakan Fidan, after complaining of significant intelligence shortcomings ahead of the coup attempt. Despite media speculation, however, he did not sack Fidan. After the coup Western countries pledged support for democracy in Turkey, a NATO ally and an important partner in the fight against Islamic State, but they have also expressed concern over the scale of the subsequent purges of state institutions. Turkish authorities have suspended, detained or placed under investigation more than 60,000 soldiers, police, judges, teachers, civil servants and others in the past week. Speaking at a meeting of G20 finance ministers and central bankers in China on Saturday, Turkish Deputy Prime Minister Mehmet Simsek said Turkey would strongly adhere to democratic principles and the rule of law.  –Reuters