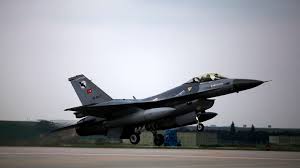 DIYARBAKIR, TURKEY – At least 55 militants were killed when Turkish warplanes hit Kurdistan Workers Party (PKK) camps in northern Iraq overnight, security sources said on Saturday, as Ankara shows no sign of easing up strikes on insurgents ahead of a Nov. 1 election. The jets took off from a base in Diyarbakir, in Turkey's southeast, and later returned without damage, the sources said. Turkey's largely Kurdish southeast has been hit by almost daily waves of deadly fighting between PKK militants and security forces since the collapse of a ceasefire in July. Security forces have responded by launching frequent bombing raids into mountainous northern Iraq where the PKK has camps. It is the worst violence NATO member Turkey has seen in two decades, coinciding with fighting across the border in Syria involving government troops and Islamic State militants. The PKK began its separatist insurgency in 1984, triggering a conflict that has killed more than 40,000 people. The group, which says it is now fighting for greater Kurdish autonomy, is designated a terrorist organization by Turkey, the European Union and the United States. President Tayyip Erdogan has promised the fight will go on until "not one terrorist is left". The conflict has flared up as Turkey prepares for a parliamentary election on Nov. 1 following an inconclusive June vote. –Reuters