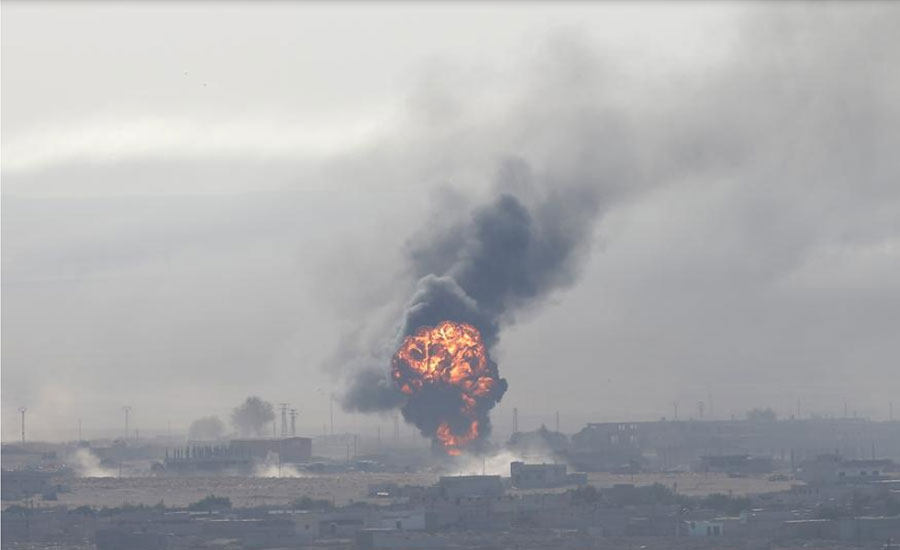 ANKARA/BEIRUT (Reuters) - Turkish-backed Syrian rebels advanced into the border town of Ras al Ain in northeast Syria but it was unclear how far, with Turkey saying it had taken the town centre, and Kurdish-led forces denying that and saying they were counter-attacking. Turkey pursued its four-day-old, cross-border offensive against a Syrian Kurdish militia despite an outcry from the United States and European Union and warnings of possible sanctions unless Ankara called off its attack. US President Donald Trump’s administration said Turkey’s incursion was causing “great harm” in relations with its NATO ally. Other NATO allies Germany and France said they were banning weapons exports to Turkey. The head of the Arab League denounced the operation and British Prime Minister Boris Johnson spoke to Turkish President Tayyip Erdogan to express his “grave concern” about the offensive. Ankara began its onslaught against the YPG militia, which it says is a terrorist group backing Kurdish rebels in Turkey, after Trump withdrew some US troops there to support Kurdish forces in the fight against Islamic State. The assault has raised international alarm over its mass displacement of civilians and the possibility of Islamic State militants escaping from Kurdish prisons leading to a revival of the jihadist group’s insurgency in Syria.
The Kurdish-led administration in Syria’s northeast said nearly 200,000 people had been uprooted so far by the fighting, while the UN World Food Programme said more than 100,000 had left Ras al Ain and the town of Tel Abyad. Turkey’s stated objective is to set up a “safe zone” inside Syria to resettle many of the 3.6 million Syrian war refugees it has been hosting. Erdogan has threatened to send them to Europe if the EU does not back his assault. Turkish officials posted photos on Saturday showing deserted streets and Turkish-backed Syrian rebels standing on Kurdish militia flags in Ras al Ain. “The (Syrian rebel) National Army took control of (Ras al Ain) town centre this morning,” a senior Turkish security official said, referring to Ankara-backed rebels. “Inspections are being conducted in residential areas. Mine and booby trap searches are being carried out.” Marvan Qamishlo, a spokesman for the Kurdish-led Syrian Democratic Forces (SDF), in which the YPG comprises the main fighting element, said they had carried out only a “tactical retreat” in Ras al Ain in response to hours of heavy Turkish bombardment. “Now the SDF’s attack has started and there are very fierce clashes,” Qamishlo told Reuters. “The clashes are continuing in the industrial district,” the part of Ras al Ain closest to the border. Speaking as night fell Mustafa Bali, head of the SDF media office, said the SDF remained in control inside Ras al Ain. The senior Turkish official said “nearly all” YPG forces had fled south from Ras al Ain. Turkish artillery continued to shell parts of the town, a Reuters reporter said. The SDF holds most of the northern Syrian territory that once made up Islamic State’s “caliphate” in the country, and has been keeping thousands of fighters from the jihadist group in jail and tens of thousands of their family members in camps. The SDF accused Turkey-backed rebel fighters of killing a Kurdish politician in a road ambush on Saturday. The rebel force denied it, saying it had not advanced that far. The Syrian Observatory for Human Rights, a UK-based organisation which reports on the war, said Turkey-backed groups had killed nine civilians on the road, including Hervin Khalaf, co-chair of the secular Future Syria Party.

In the latest international censure of Turkey’s incursion, Arab League Secretary General Ahmed Aboul Gheit called it an “invasion of an Arab state’s land and an aggression on its sovereignty”. Iraq, the current president of the League, said the offensive “will exacerbate humanitarian crises, increase the suffering of the Syrian people and strengthen the ability of terrorists to reorganise their remnants.” Turkey dismissed the criticism, saying Syrian Arabs had been the biggest victims of the YPG, which it said had driven hundreds of thousands from their homes in areas it controls. The foreign ministry said that by accusing Turkey, rather than a “terrorist organisation that threatens the territorial integrity of Syria”, the League was betraying the Arab world. Foreign Minister Mevlut Cavusoglu also dismissed an offer by Trump to mediate between Ankara and Kurdish YPG forces. “We don’t mediate, negotiate with terrorists,” he told German broadcaster Deutsche Welle. “The only thing to be done is for these terrorists to lay down arms.”

NO GERMAN OR FRENCH WEAPONS

Germany and France halted arms exports to Turkey that could be used by Turkish forces in Syria. The French foreign and defence ministries said in a joint statement that European Union foreign ministers would coordinate their position on Monday at a meeting in Luxembourg. Erdogan has dismissed mounting international condemnation of the operation and said on Friday evening that Turkey “will not stop it, no matter what anyone says”. The Turkish-backed National Army said earlier they had cut a road linking Ras al Ain and Tel Abyad, the two main targets of Ankara’s offensive, and had captured 18 villages since the operation began. Seventy-four Kurdish-led fighters, 49 Turkey-backed Syrian rebels and 30 civilians have been killed in the fighting, according to the Observatory. In Turkey, 18 civilians have been killed in cross-border bombardment, Turkish media and officials say. They included eight people in a mortar and rocket attack on the border town of Nusaybin, the local governor’s office said. Turkey said 459 YPG militants had been “neutralised” since the operation began, a term that commonly means killed.

Overnight a car bomb exploded outside a prison in Hasaka in northeast Syria, causing serious damage but no casualties, a statement from security forces in the region said. It did not say if any Islamic State prisoners there had escaped. The SDF’s Qamishlo said the attack was carried out by IS sleeper cells and another senior SDF official said the Turkish assault had given new life to the jihadist group. “The Turkish invasion is no longer threatening the revival of Daesh (Islamic State), rather it has revived it and activated its cells in Qamishli and Hasaka and all the other areas,” SDF official Redur Xelil said, noting car bombs in each of the cities in the last day. He said the SDF was now fighting on two fronts - continuing to cooperate with the US-led coalition against Islamic State while also confronting the Turkish armed forces. In its first big attack since the assault began, IS claimed responsibility for a deadly car bomb on Friday in Qamishli, the largest city in the Kurdish-held area. Five IS militants fled a jail there, and foreign women from the group being held in a camp torched tents and attacked guards with sticks and stones, the SDF said.