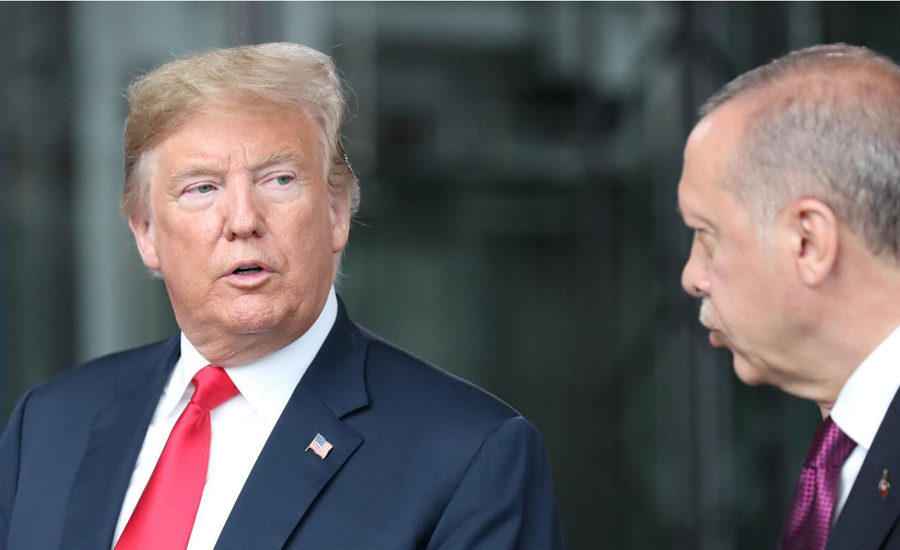 ISTANBUL (Reuters) - Turkish President Tayyip Erdogan and US President Donald Trump discussed Turkey’s plans to establish a ‘safe zone’ east of the Euphrates River in Syria in a phone call on Sunday, but the White House said US forces would not be involved. The Turkish presidency said after the call that Erdogan and Trump had agreed to meet in Washington next month, following an invitation by the US president. The call came a day after Erdogan said a military incursion into northeastern Syria was imminent, after Ankara accused Washington of stalling efforts to establish a “safe zone” there together. During the phone call, Erdogan expressed his frustration with the failure of US military and security officials to implement the agreement between the two countries, the Turkish presidency said. Erdogan also reiterated the necessity of the safe zone to eliminate the threats from the Syrian Kurdish YPG militia, which Ankara considers a terrorist organization, and to create the conditions necessary for the return of Syrian refugees, it said. “Turkey will soon be moving forward with its long-planned operation into Northern Syria,” the White House Press Secretary said in a statement . “The United States Armed Forces will not support or be involved in the operation, and United States forces, having defeated the ISIS territorial “Caliphate,” will no longer be in the immediate area,” it added. The statement from the White House also said “Turkey will now be responsible for all ISIS fighters in the area captured over the past two years”, as France, Germany and other European nations that they had come from had refused US requests to take them back. The NATO allies agreed in August to establish a zone in northeast Syria along the border with Turkey. Ankara says the zone should be cleared of the YPG. Turkey says it wants to settle up to 2 million Syrian refugees in the zone. It currently hosts 3.6 million Syrians sheltering from Syria’s more than eight-year conflict. Turkey says the United States, which supports the Syrian Democratic Forces (SDF), a YPG-led force that defeated Islamic State fighters in Syria, is moving too slowly to set up the zone. It has repeatedly warned of launching an offensive on its own into northeast Syria, where U.S. forces are stationed alongside the SDF. The two countries are also at odds over how far the zone should extend into Syria and who should control it. Turkey says it should be 30 km (19 miles) deep. The ties between the allies have also been pressured over Turkey’s purchase of Russian S-400 defense missiles and the trial of local US consulate employees in Turkey.