ISLAMABAD (92 News) – Prime Minister Nawaz Sharif has said that there are vast opportunities of expanding trade ties between Pakistan and Turkey. During his meeting with the Turkish President Recep Tayyip at Nur Khan Airbase in Islamabad on Saturday, he expressed satisfaction over progress achieved in promoting defence ties between the two countries. The prime minister said Pakistan attaches great importance to Istanbul process. During talks, the two leaders expressed their resolve to work together in meeting the challenges facing the Muslim Ummah. Earlier, Turkish President Recep Tayyip Erdogan arrived in Islamabad on a short visit. Prime Minister Nawaz Sharif and Begum Kulsoom Nawaz welcomed the Turkish leader and the first lady at the airport. Advisor on National Security Sartaj Aziz, Finance Minister Ishaq Dar, Defence Minister Khawaja Muhammad Asif, Chief Minister Punjab Mian Shahbaz Sharif, Special Assistant to Prime Minister on Foreign Affairs Syed Tariq Fatemi and Foreign Secretary Aizaz Ahmad Chaudhary were also present. After a brief stopover in Islamabad on his way back from Indonesia, the Turkish president left for his country. The prime minister and the cabinet members saw him off. [caption id="attachment_37905" align="alignnone" width="481"] 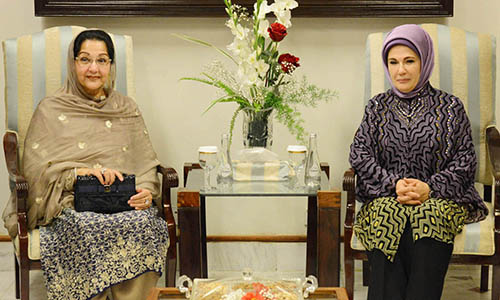