DOHA (92 News) – Turkish parliament Speaker Prof Dr Mustafa Sentop expressed Turkey’s continued support for the struggle of the Kashmiri people for their right of self-determination in accordance with the resolutions of the United Nations (UN). He made these remarks during his meeting with his National Assembly Speaker Asad Qaiser. The two speakers are in Doha Qatar to attend the 140th General Assembly of the Inter Parliamentary Union. Asad Qaiser has said that the eternal bonds of friendship between Pakistan and Turkey transcend the boundaries of time and geography as these were deeply etched into the hearts and minds of the two people. The NA speaker paid rich tributes to the leadership and vision of Turk President Recep Tayyip Erdogan and said that he has taken bold stances taken by the Turkish President over the plight of Muslims anywhere in the world. 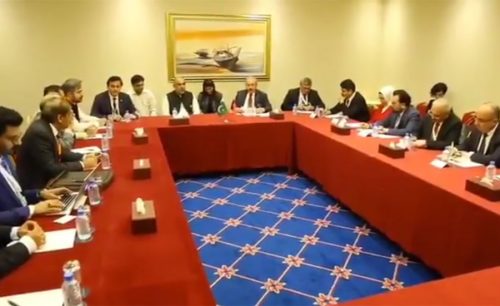 On the occasion, the Turkish speaker expressed Turkey’s continued support for the struggle of the Kashmiri people for their right of self-determination in accordance with the resolutions of the United Nations. The Turkish Speaker praised the acumen of Pakistani leadership in averting the crisis between India and Pakistan. The Turkish Speaker praised Pakistan for initiating the idea of “Five Nations Speakers’ Conference” and suggested to form a permanent secretariat of this important parliamentary forum.

Overwhelmingly Muslim Turkey needs a “religious” constitution and secularism should be dropped from the country’s new charter, parliament’s speaker said, marking a potential rupture with the modern republic’s founding principles.

The ruling AK Party, which has roots in political Islam, is pushing for a new constitution to replace the existing charter, which dates back to the period after a 1980 military coup.

Critics fear it could concentrate too much power in the hands of President Tayyip Erdogan, who wants an executive presidency to replace the current parliamentary system. The government has pledged that European standards on human rights will form the basis of the new text. “For one thing, the new constitution should not have secularism,” parliament speaker Ismail Kahraman said in a speech late on Monday, according to videos published by Turkish media.