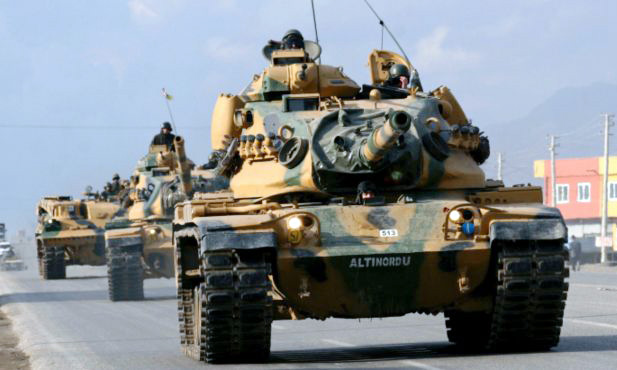 ANKARA (Reuters) - Turkish tanks backed by drones and reconnaissance planes entered Syria overnight to evacuate several dozen Turkish soldiers guarding a tomb considered sovereign territory by Ankara and surrounded by Islamic State insurgents. Prime Minister Ahmet Davutoglu said around 100 military vehicles, including 39 tanks, were involved and that the 38 soldiers guarding the tomb of Suleyman Shah, grandfather of the founder of the Ottoman Empire, had been brought safely home. The military said there had been no clashes during the operation, the first such ground incursion by Turkish troops into Syria, but that one soldier had been killed in an accident. Flanked by the chief of the military and the defense minister, Davutoglu told a news conference that Turkey had not sought permission or assistance for the mission but had informed allies in the coalition against Islamic State once it began. He said on his Twitter account that the remains of Suleyman Shah would be moved to a different area of Syria which had been brought under Turkish military control. There was no immediate reaction from the Syrian authorities. The Turkish government said late last year that Islamic State militants were advancing on the mausoleum and had repeatedly vowed to defend it. The tomb was made Turkish territory under a treaty signed with France in 1921, when France ruled Syria. Turkey has been reluctant to take an active role in the U.S.-led military campaign against Islamic State, partly because it wants to see the military action target Syrian President Bashar al-Assad's forces as much as the insurgents. Islamic State and other Islamist groups, whose strict Salafi interpretation of Islam deems the veneration of tombs to be idolatrous, have destroyed several tombs and mosques in Syria.