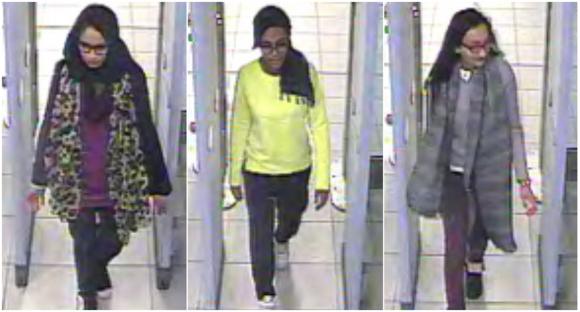 ISTANBUL - A Turkish broadcaster on Friday released what it said was footage of an alleged spy working for a country in the US-led coalition against Islamic State helping three British school girls enter Syria via Turkey. Turkish Foreign Minister Mevlut Cavusoglu earlier said a spy who assisted the London school girls, now believed to have reached territory insideSyriacontrolled by Islamic State, had been caught and was a Syrian national. He gave no details. Islamic State seized large parts of Syria and Iraq last June, cementing their rule with a militant interpretation of Islamic law, and is drawing sympathisers from many countries to support their fight. The US-led coalition is using mostly air power in an attempt to push the Sunni militant group back. Footage apparently shot on a mobile phone and released by broadcaster A Haber on its website, shows a man helping three girls unload luggage from a taxi in southeastern city of Gaziantep and then helping them into a silver minivan. "Come on sisters ... Don't forget anything," the man, identified as Muhammed Al Rashad byTurkey's Dogan news agency, is heard as saying. "You will be there in an hour insh'Allah." The man speaks both English and Arabic in the four minute-long video and his face is visible at several points. The three girls, two aged 15 and one 16, flew to Istanbul from London on Feb. 17 and then onwards to Syria, where more than 200,000 people have been killed in a civil war. The girls' families have appealed to them to return. Dogan said Rashad has been held in solitary confinement in a prison in Sanliurfa province since being caught. Citing his testimony to police, it said he had identified fighters he helped enter Syria to an official at Canada's embassy in Jordan. "I have no intention of spying. My aim is to prevent terrorist activity," Dogan quoted him as saying. A Canadian government source in Ottawa said on Thursday the nationality of the alleged spy was not Canadian and that he was not employed by Canadian intelligence (CSIS). The source did not respond when asked whether the person had been working for CSIS. Dogan quoted Rashad as saying he had accompanied at least 25 foreign fighters so far to Gaziantep. "Border commanders within Islamic State instructed me where to drop these people. I drove them to Gaziantep city centre in a cab and handed them over to others. I don't know how and from where they took them to Syria." –Reuters