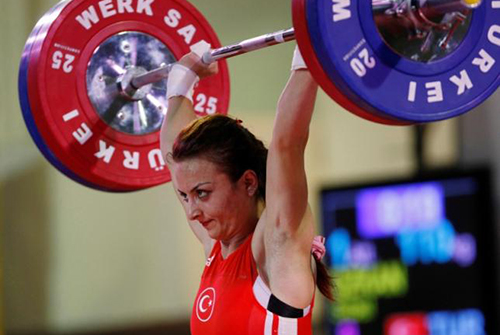 LAUSANNE – Turkish weightlifter Sibel Ozkan has been stripped of the Olympic silver medal she won in Beijing in 2008 after testing positive for a banned substance in a doping test conducted eight years later, the International Olympic Committee (IOC) said on Friday. Ozkan, 28, was caught after the IOC ordered samples from Beijing and 2012 London Games to be retested using new techniques not available at the time of the competitions. The IOC said in a statement that the 28-year-old, who competed in the 48-kilogram category, tested positive for the banned substance Stanozolol. So far 98 athletes have tested positive for banned substances in the re-tests which were ordered after "an intelligence-gathering process that started in August 2015". Ozkan, whose sample was kept in a laboratory in Lausanne accredited by the World Anti-Doping Agency (WADA), was disqualified from the events in which she competed in Beijing and ordered to return her medal, the IOC said. It said the Turkish Olympic Committee "shall notably secure the return to the IOC, as soon as possible, of the medal, the medallist pin and the diploma awarded in connection with the 48kg weightlifting event (Final) to the athlete." The IOC also requested the International Weightlifting Federation (IWF) to modify the results. "The protection of the clean athletes and the fight against doping is a top priority for the IOC," it said. Stanozolol is a synthetic anabolic steroid commonly used as a performance-enhancing drug in sports. It is favoured by athletes and bodybuilders attempting to lose fat while retaining lean body mass. Some users also say it reduces the amount of recovery time needed after injury. –REUTERS