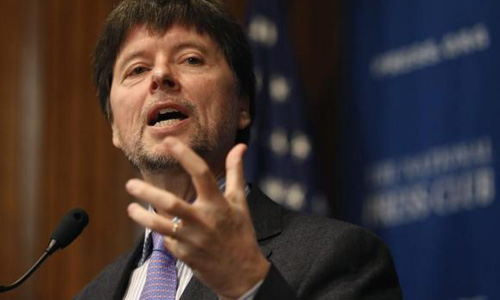 NEW YORK - For documentary maker Ken Burns the film "Cancer: The Emperor of All Maladies" has a special significance because the multiple Emmy award-winner's mother died of the disease when he was a boy. Burns was 11 years old when she lost her battle with cancer, an event he said robbed him of his childhood. "It was the defining moment of my life," the 61-year-old filmmaker said in an interview. "I wouldn't be who I am had that not happened, as tragic as that is." Burns, whose many films range from "The Civil War" to "The Roosevelts: An Intimate History," is the executive producer and creative consultant of the three-part, six-hour TV film that delves into the disease that kills about 8 million people globally each year. Directed by Barak Goodman ("Scottsboro: An American Tragedy") and based on the Pulitzer Prize-winning book "The Emperor of All Maladies: A Biography of Cancer" by Indian-born American scientist Siddhartha Mukherjee, the documentary will begin airing on PBS on Monday. Part scientific and investigative report, the series chronicles the history of cancer, early misconceptions, discoveries into its causes, the development of chemotherapy and targeted therapies and the latest advances in immunotherapy. "It is a very complex, multidimensional, multilevel presentation," Burns said of the documentary, which also has a deep emotional component. The series includes archival film, commentary by medical experts and modern case studies showing the trauma, tragedy and triumphs of children and adults coping with cancer. Toddler Olivia Blair undergoes treatment for leukemia, diagnosed when she was just 14 months old. Surgical oncologist Dr. Lori Wilson reverses roles to become a patient after learning she has invasive breast cancer. Six-year-old Emily Whitehead becomes one of the first patients to benefit from new immunotherapy treatments. Burns said the series acknowledges that scientists are on an important cusp of discovery thanks to the mapping of the human genome, advances in immunotherapy and targeted treatments and refinements in chemotherapy and radiation that could tip many types of cancer from being terminal or life-threatening into chronic treatable diseases. "We want people to be armed with the facts, just so they know, so they can ask smart questions," he said. "Maybe it isn't just the proverbial little girl or little boy who becomes a scientist, but maybe it is the patients who get the diagnosis and sucks in their breath and starts asking some tough questions. That would be good." - REUTERS