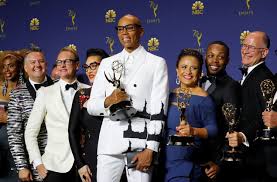 LOS ANGELES (Reuters) - Drama series “Pose” and new transgender superhero in “Supergirl” helped boost the number of LGBTQ characters to an all-time high on U.S. television, according to a report released on Thursday that said diversity programming was a crucial bulwark around attempts to undermine gay rights.
GLAAD, the media advocacy group for lesbian, gay, bisexual, transgender and queer/questioning people, said TV shows featuring LGBTQ themes and actors not only helped increase acceptance but paid off in terms of large audiences. The annual report showed that 8.8 percent of regular characters on television are LGBTQ, the highest percentage since GLAAD began monitoring the issue 14 years ago. It was published in the same week that the administration of US President Donald Trump was reported to be studying ways of defining Americans as either male or female, unchangeable, and determined by the genitals a person is born with. “With anti-LGBTQ policies being debated here and abroad, the stories and characters on television are more critical than ever before to build understanding and acceptance of LGBTQ people,” GLAAD president Sarah Kate Ellis said in a statement. “Shows like ‘Will & Grace,’ ‘Supergirl,’ ‘Empire’ and ‘How To Get Away with Murder’ all attract millions of viewers weekly and demonstrate that audiences are hungry for new stories,” she added. GLAAD is campaigning to see LGBTQ characters make up 10 percent of series regulars on television by 2020. The GLAAD report looked at programming on air or announced on networks, cable and streaming services from June 2018 to May 2019 and found the number of transgender and bisexual characters alone has soared to 143 from 110 last year. The FX series “Pose,” about the underground ball culture in New York in the 1980s, features the largest ever number of transgender characters making regular appearances on a scripted television series. “Supergirl” on CW introduced transgender actress Nicole Maines as superhero Dreamer in its fourth season earlier this month. Netflix almost doubled its already high number of LGBTQ characters to 88 thanks partly to make-over reality series “Queer Eye,” prison drama “Orange Is the New Black,” and adult animated comedy “BoJack Horseman.” Thursday’s report showed that diversity was not limited to streaming, pointing to CBS police drama “Instinct,” starring bisexual actor Alan Cumming as a former CIA officer in the lead, Disney Channel’s “Andi Mack,” which features a gay middle-school boy, and “RuPaul’s Drag Race” on VH1.