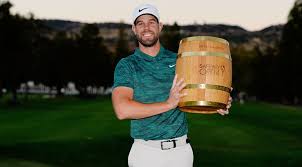 (Reuters) - It has been 15 years since Bob Tway recorded the eighth and final PGA Tour victory of his career and on Sunday it was his son Kevin’s turn to savour that winning feeling after he survived a three-way playoff to win the Safeway Open.
Tway, who said his victory had probably reduced his father to tears, beat Ryan Moore and Brandt Snedeker to claim the title in Napa, northern California. Snedeker had squandered a five-shot lead during the final round before being eliminated at the first extra hole at the Silverado Resort, Tway then sinking a 10-foot birdie at the third extra hole to beat Moore. It was the first PGA Tour victory for the 30-year-old, who was born less than two years after his father won the 1986 PGA Championship. Kevin and Bob are the 10th father-son duo to record PGA Tour victories, Tour data showed. “I think he’s probably crying to be honest,” said Tway of his father, who had been watching on television. “He’s pretty proud of me. I talk with dad every night. He’s probably the biggest person I lean on. I can’t wait to call him. “It’s been a long road but this is why you work hard. Finally got here and it feels amazing.” Snedeker had looked set to claim the opening event of the 2018-19 PGA Tour season until he made three successive bogeys from the 10th hole. His retreat let the pack back into contention in what turned into a wild finish in conditions that started out extremely windy before abating by the final few holes. Snedeker shot a two-over-par 74, Moore a 67 and Tway 71. The trio finished regulation at 14-under 274, one stroke ahead of five others. Tway birdied the final two holes of regulation, two-putting the par-five 18th to join the playoff. After Tway and Moore twice birdied the 18th in the playoff, they continued at the par-four 10th, where Tway finally prevailed just before sunset. Moore, who started the day seven shots behind Snedeker, was happy just to have been in contention. “This was a bonus, just to be in this position to have a chance to win,” he added. “When I got done with my round there were plenty of guys with plenty of holes left. I was proud of how I played.”

Reporting by Andrew Both in Cary, North Caroli