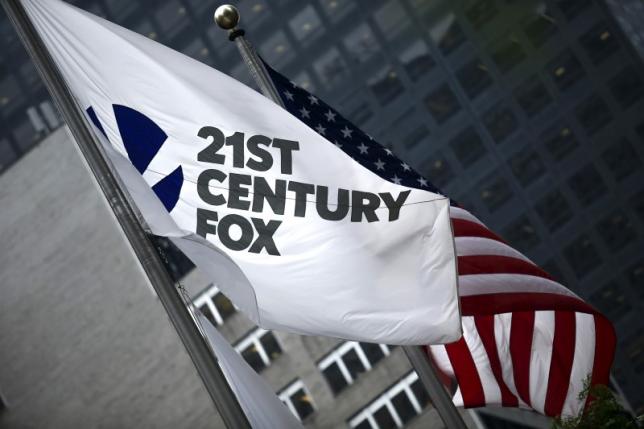 NEW YORK - Twenty-First Century Fox Inc reported better-than-expected quarterly profit, but higher sports programming and film marketing costs held back gains, and the media company's shares fell more than 4 percent after-hours. Executives also sought to quell concerns over the future of Fox News Channel following the departure of long-time leader Roger Ailes. "Throughout this process, we have moved quickly and decisively to protect the business, protect its employees and protect the unique and important voice Fox News has," Co-Executive Chairman Lachlan Murdoch said on a conference call with analysts, addressing Ailes' resignation two weeks ago from the network he built into a powerhouse. Ailes left amid allegations of sexual harassment, which he has denied. Fox News is on track to record its highest-rated year ever, Murdoch said. The network known for its line-up of conservative commentators has been boosted by high interest in the US presidential campaign. Asked if Fox News would change its strategy, Murdoch said: "There is no desire or need to shift the position it has in the market." Strong results from Fox News helped lift revenue in the company's cable division for the quarter that ended in June by 9.9 percent, accounting for more than half of the company's total revenue. Domestic advertising sales in the cable business rose 13 percent. But higher costs for sports programming and film marketing dented profits. Some major film releases fell short of expectations, Chief Executive James Murdoch said. "It is clear we have work to do at the film studio," he said. After an initial spike, shares of the Rupert Murdoch-controlled company dropped more than 4 percent to $25.85 in after-hours trading. Pivotal Research Group analyst Brian Wieser said fees from pay-TV operators "came in a little soft versus expectations." Fee revenue rose 6 percent in the quarter, and "is expected to continue to grow at a low double-digit annual pace," Chief Financial Officer John Nallen said. S&P Global Market Intelligence analyst Tuna Amobi cut his fiscal 2017 earnings-per-share estimate by 8 cents to $2.06, citing Fox's "ongoing digital and other investments." Total net income attributable to shareholders jumped to $567 million (£425.5 million), or 30 cents per share, from $87 million, or 4 cents per share, helped by a tax benefit. Excluding certain items, Fox earned 38 cents per share, just ahead of analysts average estimate of 37 cents per share, according to Thomson Reuters I/B/E/S. The company's adjusted revenue rose 7.1 percent to $6.65 billion. -Reuters