ISLAMABAD (92 News) – Social media micro-blogging website Twitter sent a notice to President Dr Arif Alvi in reference to his tweet which supported Indian occupied Kashmir (IoK) on India’s complaint. The president received an email from Twitter for his tweet which supported IoK after India imposed a curfew and annexed the disputed region. In the email, the social media site wrote that it had received a complaint against his account for tweeting in favor of the Kashmiris. Meanwhile, Twitter further said, that it had investigated the said tweet and could not identify any ‘violations of the Twitter rules or applicable laws’. “Accordingly, we have not taken any action at this time,” the email added. 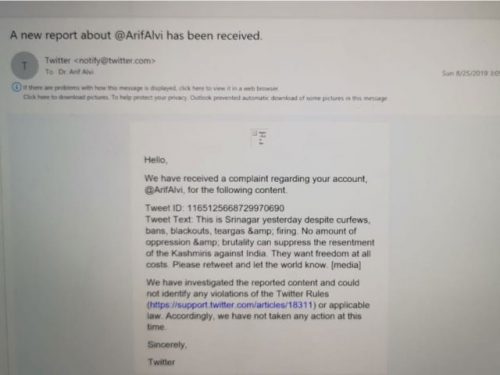 On August 24, the president had posted a video on his official Twitter handle and raised voice for the Kashmiris. “This is Srinagar yesterday despite curfews, bans, blackouts, teargas & firing. No amount of oppression & brutality can suppress the resentment of the Kashmiris against India. They want freedom at all costs. Please retweet and let the world know,” President Alvi tweeted.

This is Srinagar yesterday despite curfews, bans, blackouts, teargas & firing. No amount of oppression & brutality can suppress the resentment of the Kashmiris against India. They want freedom at all costs. Please retweet and let the world know. pic.twitter.com/2OqueQmJpY

Following the recent developments in IoK, Twitter has been suspending accounts who have been posting about Kashmir. #StopSuspendingPakistanis was also trending on Twitter in Pakistan as multiple users complained that their accounts have been suspended. After the curfew in the IoK, Indian government has also barred Indian politicians from visiting IoK. On Saturday, Congress leader Rahul Gandhi and 11 leaders of other opposition parties were sent back to New Delhi soon after landing at Srinagar airport, Indian media reported. The delegation members, including Ghulam Nabi Azad, were not allowed to leave the airport. The opposition leaders had reached Srinagar to express solidarity with the Kashmiris and meet the Hurriyat leaders. Ghulam Nabi Azad said that why they had not been allowed to leave the airport if everything is fine. “The IOK situation is very concerning. It’s close to 20 days. No news for 20 days. The government says the situation is normal. But then they do not allow leaders to go? Haven’t seen such contradiction… If it’s normal, why aren’t we allowed?” he said.