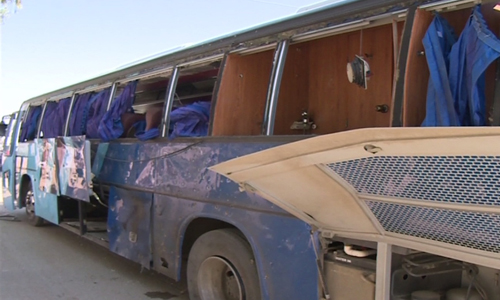 KARACHI (92 News) – As many as two people were killed and 9 others injured on Friday when a bomb targeted a bus carrying SSU commandoes in the Landhi area of Karachi. As per Karachi City Police Chief Ghulam Qadir Thebo the bomb was planted on a motorcycle and was triggered through remote-control when the SSU bus was en route to work. As a result, two SSU commandoes named Gulzar and Chandar were killed and 9 people were injured, who were transferred to Jinnah Hospital.

According Emergency head at Jinnah hospital, emergency has been declared in the hospital. One official received ball-bearings and iron-shrapnel on his head, the doctor said. Police, Rangers and other security agencies immediately reached the scene and cordoned off the area. Investigations are underway. Meanwhile, Prime Minister Nawaz Sharif condemned the attack in a statement saying that the terrorists' cowardly attacks will not hamper the nation's resolve to eliminate terrorism from the country.