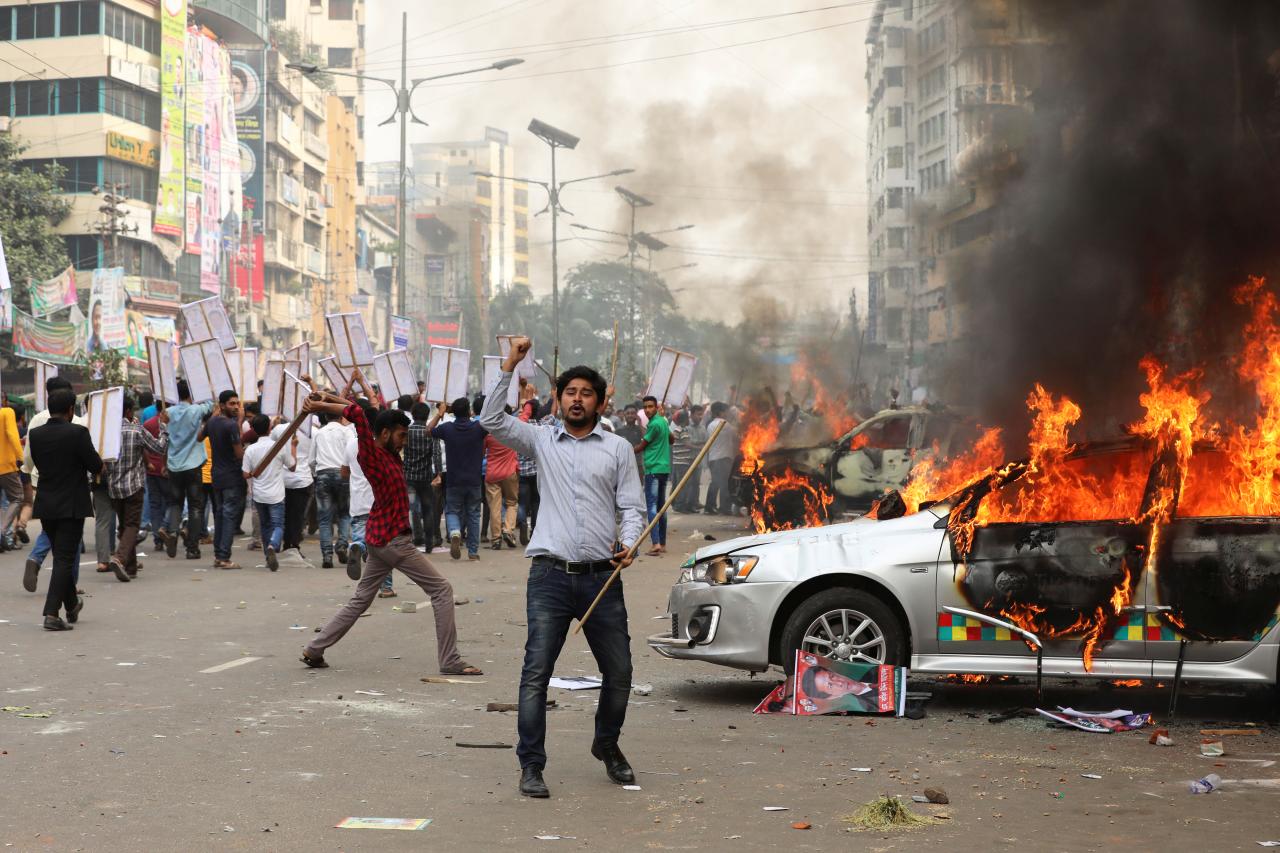 DHAKA (Reuters) - Political clashes in Bangladesh left two campaign workers dead and injured dozens more, police said on Wednesday, as tensions soared before a general election on Dec. 30. Prime Minister Sheikh Hasina of the ruling Awami League Party is seeking a third straight term as formal election campaigning got underway on Monday. Her old rival, Khaleda Zia, who leads the main opposition Bangladesh Nationalist Party (BNP), is in jail after being convicted on charges she says were politically motivated. The BNP boycotted the last election, in 2014, as unfair, but has said it will take part this time, though it is seeking international monitors of polls it believes will be flawed. Workers from the two parties clashed on Tuesday in two districts outside the capital Dhaka, leaving two Awami League campaigners dead, police said. Police in the Noakhali and Faridpur districts said cases had been opened against 45 people and more arrests were expected. “The returning officer has convened a meeting of both parties to avoid such an incident in future,” said Elias Sharif, superintendent of police in Noakhali. Awami League spokesman Hasan Mahmud accused the BNP of trying to “foil a peaceful environment and for that they are attacking our people”. The BNP denied the accusation and said at least 200 of its supporters were injured. It also accused Awami League workers of attacking the motorcade of the BNP general secretary, a charge denied by Hasan. Elections in Bangladesh are typically marred by violence, but tensions are particularly high during this campaign season. The BNP says scores of its workers have been detained in recent months on fictitious charges. Hasina and Khaleda, who between them have ruled Bangladesh for over two decades, are bitter rivals, and the BNP says its leader has been jailed on trumped-up charges to keep her out of politics. While the BNP has joined smaller opposition parties to form the United National Front, the alliance does not have a clear candidate for prime minister. BNP lawyers are still working for Khaleda’s release before the Dec. 30 vote. Awami League “supporters and workers are desperate to keep us away from the election as they are contemplating a massive defeat,” said Ruhul Kabir Rizvi, the BNP’s senior joint secretary general.