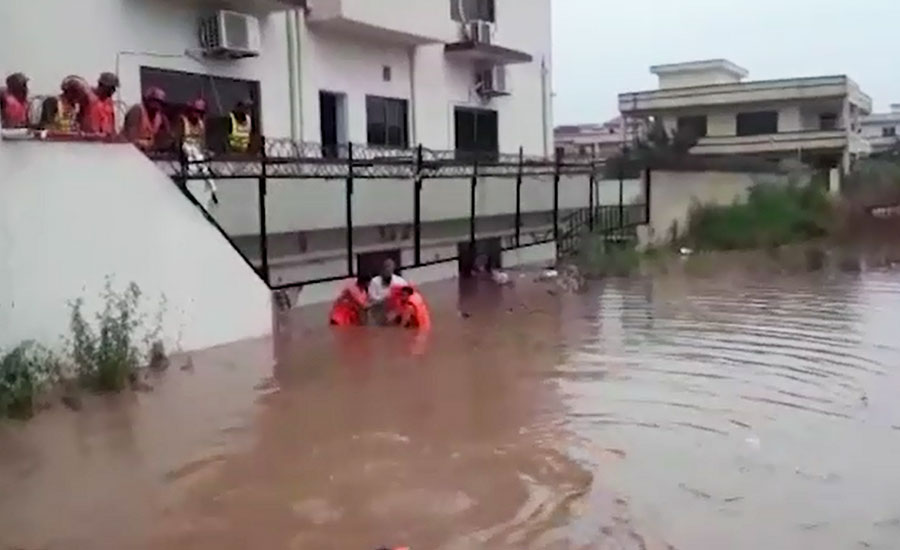 ISLAMABAD (92 News) – At least two people including a minor with mother were killed as rain water flooded house’s basement in Islamabad on Thursday. According to the reports, six residents were sleeping when rain water inundated the basement, making them unconscious. The rescue teams arrived at the scene and shifted the victims to the hospital for medical assistance where a woman and a child died. Heavy storms with rain destroyed the daily routines system of the different cities including Islamabad, Rawalpindi, Sialkot, Muree and Kashmir. Meanwhile, two brothers were electrocuted due to the rain in Azad Jammu Kashmir and lost their lives. 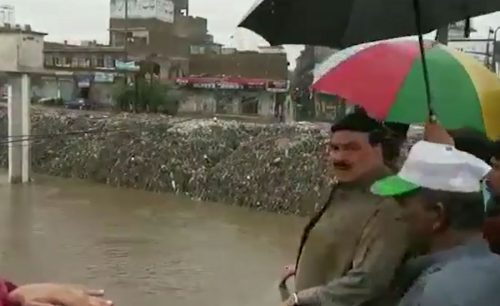 On the other hand, flood alert issued after water level rises in Rawalpindi nullah. Federal Minister for Railways Sheikh Rasheed reached Gawalmandi to review the current situation. However, the WASA authorities briefed the minister about situation. The ordinary water level rises in the rivers and water level increased in the drains. The lands sliding warning issued for Pakistan Army, rescue, WASA and other institutions in the Kashmir and Hazara division.

Heat-stricken residents of Lahore received respite from the sweltering heat as the rain of monsoon season turned the weather pleasant here. According to the details garnered, the heavy monsoon rain lashed Lahore and its adjoining areas in the wee hours. The incessant rain has flooded roads and streets in many parts of the city which stopped many vehicles mid-way. Following to the rain storms in Lahore, the roads seem to be ponds and the rainwater entered houses in several low-lying areas of Lahore while parts of the city witnessed power outage as more than 200 feeders tripped soon after the rain started. 110 millimeter in Misri Shah, 104 millimeter in Walled City of Lahore, 75 millimeter in airport and 75 millimeter Gulshan Ravi of rainfall is recorded. Many vehicles including motorbikes and cars stopped due to the rain. Dozens of flight also have been delayed due to cloudy weather. Meanwhile, the leaves for WASA staff have been cancelled due to the emergency situation. Locals faced much difficulty heading to offices as the rain converted roads to puddles.