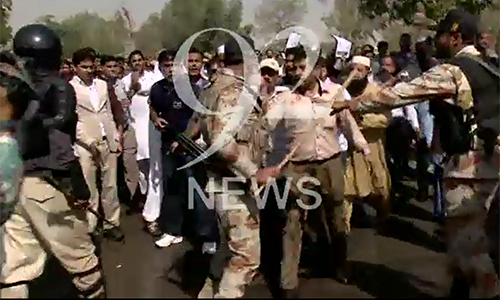 LAHORE (92 News) – Three people were killed while several others injured when police and Rangers resorted to baton-charge and rubber bullets at employees who tried to march towards Jinnah Terminal in protest against the privatization of the PIA.

As a result, the flight operation was suspended in Karachi.

Meanwhile, the PIA administration has started preparing the lists of absent employees who will be sacked under the Essential Service Act shortly.

Opposition Leader in the National Assembly Khurshid Shah said that the Act had been imposed first time during a democratic government.

He feared the ILO could suspend the membership of Pakistan.