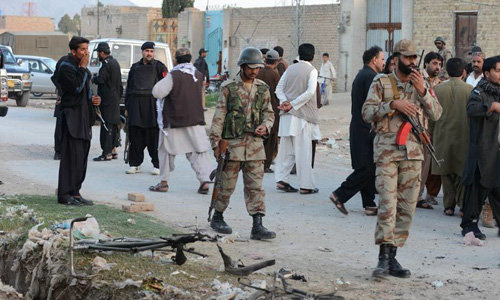 QUETTA (92 News) – Two drug pushers were killed during a search operation along the Pak-Afghan border area on Friday. A spokesman for the Frontier Corps said that the smugglers were entering Pakistan from Afghanistan when they started firing on the FC personnel, which was retaliated. As a result, two drug pushers were killed. A huge quantity of weapons and narcotics was recovered from the drug smugglers. Meanwhile, the FC personnel arrested a suspect and recovered a huge quantity of weapons from him in Dera Murad Jamali. The recovered weapons include an anti-aircraft gun, 22 SMG, 10 G 3 and seven rockets. The suspect has been shifted to an unknown place for interrogation.