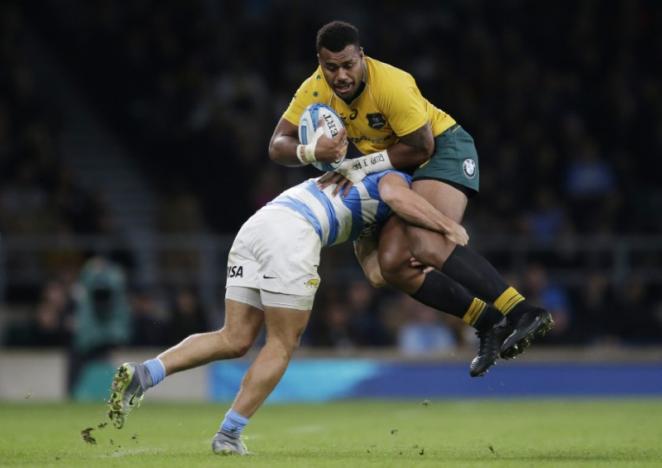 LONDON - Australia pounced on Pumas errors to score two intercept tries and four altogether for a 33-21 bonus-point victory at Twickenham that earned them second place in the Rugby Championship. The Wallabies finished above South Africa after champions New Zealand's 57-15 victory over the Springboks in Durban with Argentina taking the wooden spoon despite a performance that could have given them victory. Australia made the most of less possession than Argentina, scoring two tries through centre Samu Kerevi and one each by forwards Adam Coleman and Dean Mumm with inside centre Bernard Foley kicking 13 points. But the Wallabies also had two forwards, flanker Michael Hooper and lock Coleman, sent to the sin bin in the first half but still changed ends 18-8 in the lead. Argentina scored tries through lock Matias Alemanno and centre Jeronimo de la Fuente while Santiago Gonzalez Iglesias, standing in for injured flyhalf Nicolas Sanchez, kicked 11 points after missing his first three efforts. "I think we did well, we hung in there, played with 14 men for 20 minutes," Australia coach Michael Cheika said. "We got a little rattled during those times but we managed to get reorganised. "We started the tournament badly but I think we've gradually been improving and attacked better (with each match)," added Cheika, whose side are building towards a test against England at Twickenham on Dec. 3. They hope to gain revenge for a 3-0 series defeat by England at home in June though first they have another shot at the All Blacks in the third Bledisloe Cup clash on Oct. 22. "We’ve got a massive challenge with New Zealand in a couple of weeks time," he said after his side were well beaten by the All Blacks in their two Rugby Championship meetings. HIGH TACKLES The Pumas had a first-minute try after charging down a Will Genia kick ruled out for offside so Australia drew first blood when Coleman went over from a ruck in the fifth minute. Foley then put the Wallabies 10 points ahead with a penalty but soon after they were down a man when Hooper was sin-binned in the 17th minute for a high tackle. The Pumas made the most of the extra man and Alemanno scored from a driving maul after a lineout. Australia, making light of the yellow card shown to Coleman in the 31st minute for another high tackle, added a second try through Kerevi. Argentina reduced the arrears with their second try five minutes into the second half, de la Fuente going over from a tapped penalty. Gonzalez Iglesias converted to bring the Pumas within three points but a poor Alemanno offload was jumped on by Hooper and his pass sent Kerevi away for his second try. Two successful Gonzalez Iglesias penalties then brought Argentina back within four points before another Foley penalty and Mumm’s intercept try secured the win for Australia. "This hurts because I think we could have won, Australia were not better than us" said Argentina coach Daniel Hourcade after his side had 84 percent possession in the second half. "We didn't score more because of our errors and they did because of our errors." -Reuters