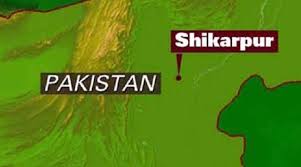 SHIKARPUR (92 News) – At least two people were killed and three others sustained injuries when a clash erupted between two armed groups over water issue. As per details, a clash between two armed groups erupted over water issue near Shikarpur’s Dukhan village, killing two people namely Sabir and Sadar Din, while injuring three others. The bodies were shifted to Tehsil Hospital, while the injured men were taken to Civil Hospital Shikarpur for medical care.