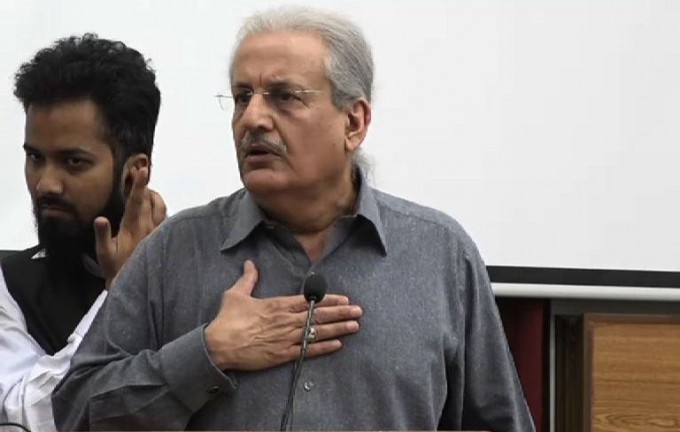 ISLAMABAD (92 News) – Former Senate chairman Mian Raza Rabbani on Saturday lamented that two major political parties were being targeted, and raised doubts over the transparency of the upcoming polls. Addressing to a Senate session, the former Senate chairman slammed the caretaker government and the Election Commission of Pakistan (ECP), questioning their purported intentions ahead of the upcoming general elections. Rabbani claimed that political parties are being targeted through National Accountability Bureau (NAB) during electoral process. He said that the election candidates were being summoned in the NAB, saying that it was directed to the candidates leave the election and must appear before the NAB. “How can these elections be called free, fair and transparent?” Rabbani questioned, adding that the ECP’s silence on the matter was criminal. Rabbani also questioned that where was the ECP when Bilawal Bhutto was stopped in different areas. Senator Raza Rabbani has raised questions about the role of the ECP as he pointed out that PML-N workers are being arrested. – Political, law & order situation discussed in Senate – The Senate, which resumed its session on Saturday morning, is holding discussion on prevailing law and order and political situation in Pakistan. Participating in the debate, Saadia Abbasi of PML (N) said the caretaker governments should stay impartial to ensure free, fair and transparent elections in the country. Shibli Faraz of PTI said his party supports the demand of free and fair elections. Leader of House Raja Zafarul Haq said under the elections act 2017, responsibility rests with the caretaker governments to assist Election Commission of Pakistan in conduct of smooth elections and ensuring rule of law in the country. Leader of Opposition Sherry Rehman said reputation of these elections is vital for positive image of Pakistan. She said it will augur well for the country if the elections were managed in a smooth manner. Assad Junejo denounced the recent acts of terrorism in the country and urged the caretaker government to fulfill its responsibility vis-à-vis law and order situation. Sitara Ayaz said it is responsibility of political parties to motivate the people to come out on the polling day and cast their vote. Mohsin Aziz of PTI said people have rejected politics of corruption and plunder. He regretted that certain elements are maligning state institutions for their vested interests. Naseebullah Bazai said political parties should stand behind the election commission for smooth conduct of the polls. Pervez Rashid said all political parties should be given level playing field in the elections.