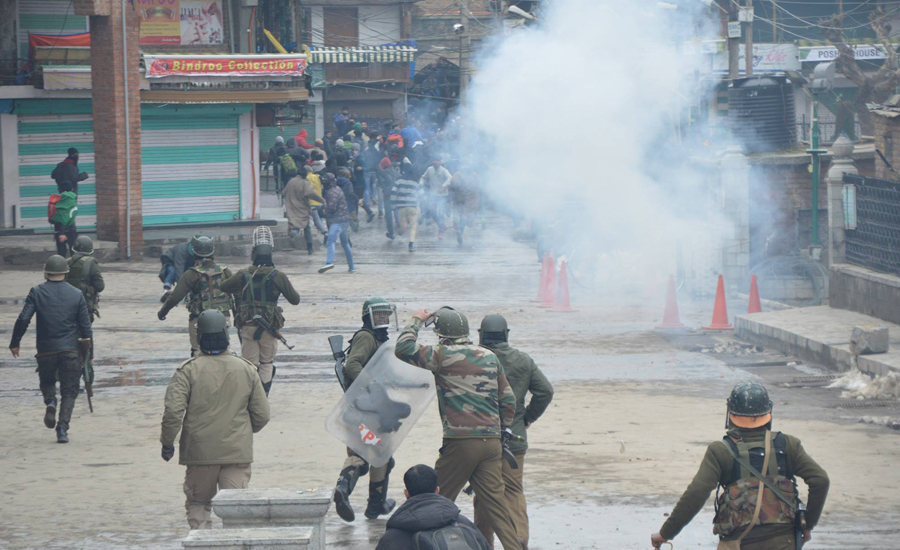 SRINAGAR (KMS) – Kashmiris on both sides of the Line of Control and across the world observed Indian Republic Day, the 26th January, as Black Day, on Saturday, to remind the world that India’s continued denial of right to self-determination to the Kashmiris is contrary to its claim of being a democratic republic. Call for the observance of the Black Day was given by the Joint Resistance Leadership comprising Syed Ali Gilani, Mirwaiz Umar Farooq and Muhammad Yasin Malik and supported by the Kashmir High Court Bar Association. The day was marked by a complete strike in Occupied Kashmir. The occupation authorities deployed Indian troops and police personnel in strength in Srinagar and other towns to prevent people from staging anti-India demonstrations. The authorities also placed Hurriyat leaders, including Syed Ali Gilani, Muhammad Ashraf Sehrai, Muhammad Yasin Malik, Hilal Ahmed War, Javaid Ahmed Mir, Zafar Akbar Butt, Abdul Ahad Parra, Molvi Bashir Irfani and Parray Hassan Firdosi, under house arrest or in custody to prevent them from leading the demonstrations. All roads leading to a cricket stadium in Sonawar area of Srinagar, the main venue of official function in Srinagar, were sealed. The Indian forces also used quad copter drones fitted with cameras for surveillance around the stadium. The authorities suspended mobile Internet and rail services in the occupied territory. Media persons held a rally and a sit-in protest after Indian police stopped senior journalists from covering the function of Indian Republic Day in Srinagar. The Joint Resistance leadership, in a statement, in Srinagar deplored that New Delhi had been illegally occupying Jammu and Kashmir and denying all basic rights to the Kashmiri people for the past over seven decades. Meanwhile, Mirwaiz Umar Farooq launched a social media campaign, highlighting the miserable plight of the Kashmiri detainees lodged in different jails. He shared pictures of many detainees on twitter along with details about their place of arrest and present detention and the sufferings their families are going through. On the other hand, Indian troops in their fresh act of state terrorism martyred two youth during a cordon and search operation in Khonmoh area of Srinagar. The killing of the youths triggered massive demonstrations in the area. Indian police and troops used brute force to disperse the protesters. Meanwhile, the All Parties Hurriyat Conference Azad Jammu and Kashmir chapter held a protest demonstration in front of the Indian High Commission in Islamabad to mark India’s Republic Day as Black Day. A rally was held in Muzaffarabad under the aegis of Pasban-e-Hurriyat Jammu and Kashmir to denounce the Indian brutalities in occupied Kashmir. In Brussels, Kashmir Council Europe also staged a demonstration outside the Indian Embassy on the occasion of Black Day. The demonstrators led by the Council’s Chairman, Ali Raza Syed, urged New Delhi to allow the people of Jammu and Kashmir exercise their right to self-determination to decide their future by themselves.