SADIQABAD (92 News) – Two pilots were died in aircraft crash during the anti-locust sprying at Bandhi area of Sadiqabad fields on Sunday. According to the details garnered, an aircraft engaged in an aerial insecticide spray to get rid of swarms of locust and was crashed purportedly due to a technical fault. It was also reported that two pilots of the Federal Department’s Plant Protection Unit lost their lives in a deadly crash. The two martyrs have been identified as pilot Muhammad Shoaib and engineer of the Plant Protection Department Fawad Butt. The aircraft was called by the district administration to spray insecticide against the attack of desert locusts in the fields. The aircraft was crashed at Chak No 215 near Sadiqabad due to a technical fault resulting in death of both the pilots on board the plane. The Assistant Commissioner Sadiqabad rushed to the spot of the plane crash with rescue teams and heavy contingents of police. The police cordoned off the spot of the plane crash. The sources informed that a technical fault developed in the aircraft during the aerial spray and the plane crashed to the ground leaving both the pilots martyred in the incident on the spot. Earlier, the Swarms of locusts have landed in Karachi and interrupted the Quaid-e-Azam Trophy match. According to the reports, the massive locust swarm descended in the metropolis and reported at Bahadurabad, Gulshan Iqbal and other city areas along with the farmlands of Malir, Gadap and Bin Qasim Towns of the city. The swarms of locusts also disturbed a cricket match at the National Stadium of Karachi between Sindh and Northern teams. The unexpected visitors just weren’t cricket fans though. The match had to be interrupted briefly when a locust swarm showed up while the Northern were batting. 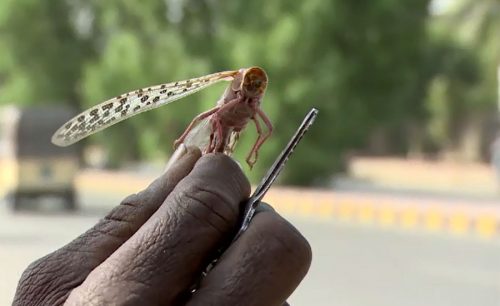 The swarm was large enough that the players had to stop playing and cover their eyes and ears in a bid to avoid contact with the insects. The crop eating insects bring hunger with them by thoroughly eating cops and vegetation they find at any place. The normal life of the residents of Malir, Korangi, Gulshan Iqbal, Hassan Square, Bahadurabad and adjoining areas disrupted. The swarms of locusts also descended at the Old Sabzi Mandi, National Stadium and a private school and hospital at the Stadium Road. Federal Plant Protection Department in a report said that November is the month of breeding for locusts adding that the swarms of the insect are moving from the desert areas of Sindh to Balochistan.