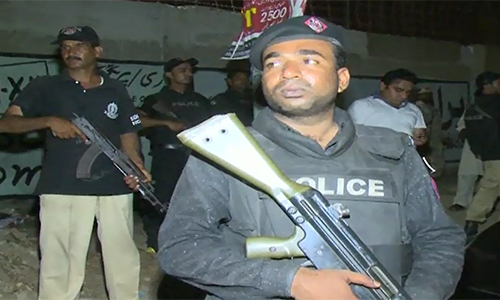 KARACHI (92 News) – Police have on Wednesday apprehended at least 18 suspect including two terrorists during operations carried out in provincial capital.

As pre details, Praidi police detained at least two terrorists namely Naimatullah and Shamroz, who belonged to a banned organization and recovered weapons and bombs. The terrorists were also involved in different incidents of robbery and extortion.

In another incident, police and law enforcement agencies carried out an operation in Maimar, Machar Colony and Lyari and nabbed at least 6 people including two gang war criminals.

Meanwhile, police have arrested at least 10 suspects during a search operation conducted in Jumma Goth, while a body of a woman was recovered from Ferozabad. The body was shifted to hospital for autopsy.