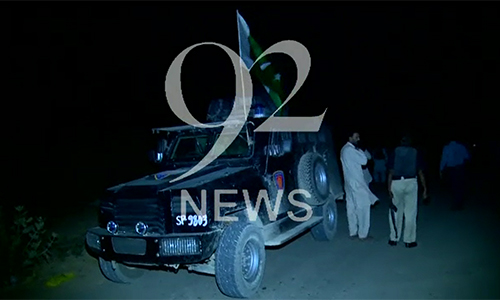 KARACHI (92 News) – Two terrorists were killed in an attack on a police armoured vehicle on Ijtama Road in Manghu Pir area on Tuesday. The vehicle was going to conduct a raid on the information of sensitive agencies when a motorcycle hit it. Later, the attackers opened fire at the vehicle, which was retaliated. As a result, two terrorists died on the spot. The police have recovered a motorcycle, two hand grenades and weapons from the attackers. Meanwhile, the Sindh Home minister has announced Rs 500,000 for the police party.