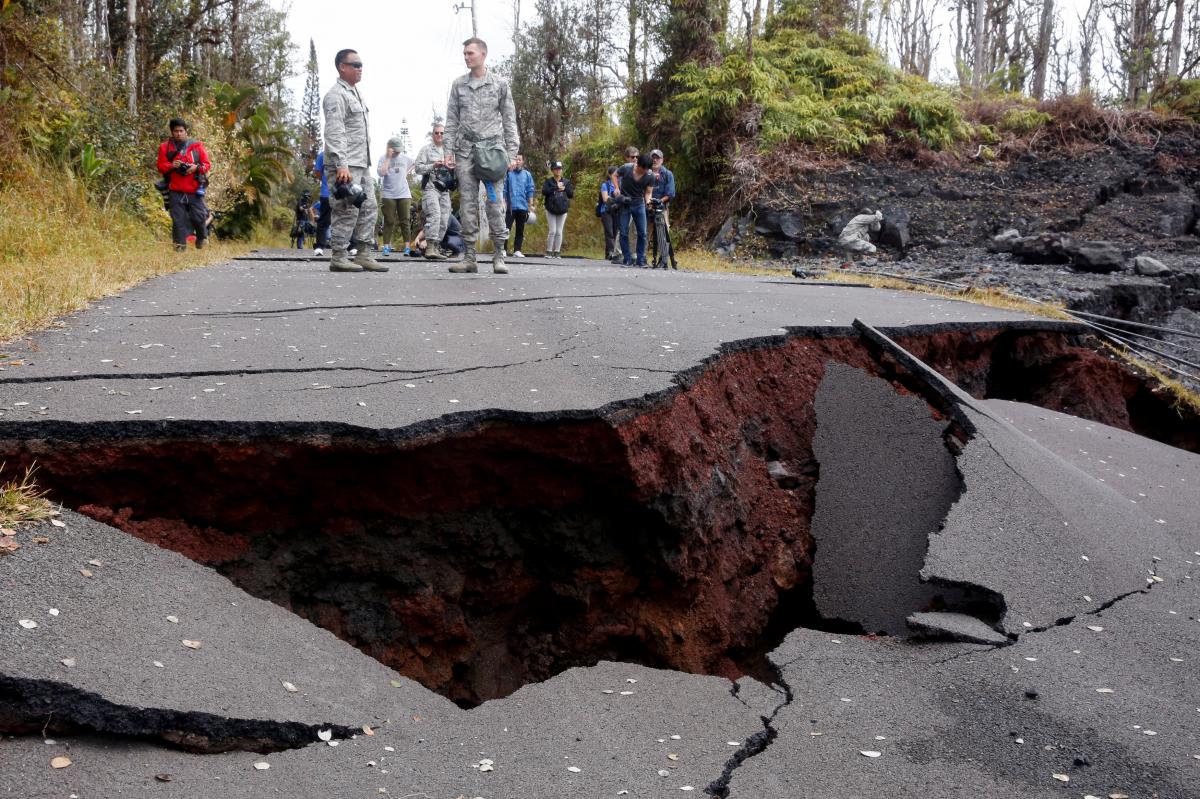 PAHOA (Reuters) - Two weeks after fountains of lava and poisonous gas from Hawaii’s Kilauea volcano forced hundreds of people to flee their homes in the middle of the night, things were only getting worse for residents after another eruption. As Kilauea oozed lava from 22 fissures on its eastern flank, residents of Pahoa on the Big Island, some wearing ash masks, hunkered down in shelters and waited for an expected resumption of major eruptions. The first evacuations came before dawn on May 3, when the volcano began its current cycle of eruptions and earthquakes. “We’re all trying to establish or find some normalcy in our lives knowing that we’re on an active volcano that’s very active right now,” said Cindy Hartman, a dietician at Hilo Medical Center. She packed up and left her home in the Kalapana-Seaview neighbourhood on Sunday, after a fissure opened just two miles(3.2 km) from the last road out. Hartman has been staying with a friend but is looking for temporary housing, faced with the possibility that lava could flow for months. Old-timers have reminded her that a similar event in 1955 lasted for 88 days. Officials raced to a fast moving lava flow that had crossed Pohoiki Road, one of a main arteries in and out of the area, isolating about 40 homes. Rescue workers were using helicopters to check on residents who choose to remain or were checking on their property and told people to stay away from the “emergency situation.” “Residents directed to stay where you are, wait for further instructions. Everyone stay clear of area,” the county said in an alert. Kilauea spewed ash nearly six miles (9 km) into the sky on Thursday in what scientists warned could be the first in a string of even more violent explosive eruptions. Residents were warned to take shelter from the ash as toxic gas levels spiked in a small southeast area where lava has burst from the ground during the two-week eruption. The mouth of the summit crater vent has nearly tripled in size during the past couple of days from about 12 acres (4.9 hectares) in area to 34 acres (13.8 hectares), according to USGS geophysicist Mike Poland. While this widening coincided with back-to-back explosive, steam-driven eruptions from the crater this week, Poland said, the enlargement was caused primarily by the interior walls of the crater vent collapsing, as the magma continues to drop through the throat of the volcano. Geologists say it remains unlikely Kilauea will have a massive eruption like that of 1790, which killed dozens of people in the deadliest such event to occur in what is now the United States. Kilauea’s falling lava lake has likely descended to a level at or below the water table, allowing water to run on to the top of its lava column and create steam-driven blasts, they said. A spike in toxic sulphur dioxide gas levels has closed schools around the town of Pahoa, 25 miles (40 km) east of the volcano, where lava from giant cracks has destroyed 40 homes and other structures, and forced about 2,000 residents to flee. A change in wind direction caused volcanic gas to drift northwest towards Pahoa, prompting National Guard troops to don gas masks at a nearby road intersection. The Pahoa fire station recorded a “red level” of sulphur dioxide, meaning the gas could cause choking and an inability to breathe, Fenix Grange of the Hawaii Department of Health told a news conference in Hilo. There have been no deaths or serious injuries reported during the current eruption. An aviation red alert was in effect due to risks ash could be carried into aircraft routes and damage jet engines.