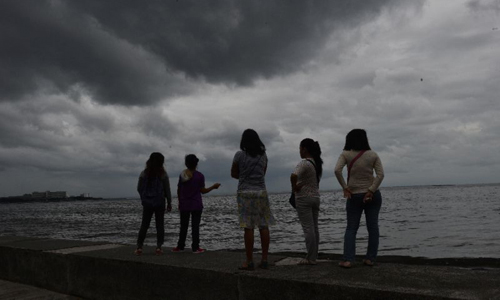 PHILIPPINES - A powerful typhoon strengthened on Sunday as it approached the central Philippines and authorities issued warnings of Christmas Day destruction as they moved thousands of people to safety. Typhoon Nock-ten was packing maximum sustained winds of 185 kph (115 mph) with gusts up to 255 kph as it moved west over the ocean at 15 kmh, the national disaster agency said in its latest weather bulletin. Sustained wind was earlier 175 kph with gusts of 215 kph. "We should be prepared because this is a strong typhoon. It could destroy houses and weak structures," said Rene Paciente of the weather bureau. The storm was expected to make landfall in Catanduanes province on the Bicol peninsula later on Sunday, and the highest storm alert had been issued there. Authorities fearing a storm surge have moved thousands of people out of coastal villages to safety. Land, sea and air travel has been suspended in some areas, leaving stranded thousands of people heading home for the holidays in the mostly Christian country. In 2013, more than 6,000 people were killed and 200,000 homes were destroyed when Typhoon Haiyan, the strongest-ever storm to make landfall in the Philippines, hit the central islands of Leyte and Samar. About 20 major typhoons pass through the Philippines each year. Since 1948, at least seven typhoons have hit the country during the Christmas period. -Reuters