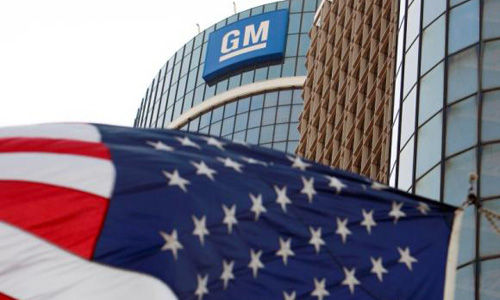 DETROIT - General Motors Co (GM.N) and Ford Motor Co (F.N) have much higher labor costs than their cross-town rival Fiat Chrysler, according to a new study released just ahead of a meeting of United Auto Workers officials as they prepare for contract talks with the Detroit Three. GM's (GM.N) U.S. auto workers on average earn about 21 percent more in wages and benefits than their counterparts at Fiat Chrysler Automobiles (FCAU.N) (FCHA.MI), reflecting the much higher percentage of lower-paid, entry-level workers at FCA, according to a study of 2014 labor costs by the Center for Automotive Research (CAR). Ford Motor Co's (F.N) hourly labor costs were $57, just behind GM's at $58. FCA's U.S. workers averaged $48 per hour. The two-tiered pay scale implemented as part of the United Auto Workers 2007 labor agreement allows GM, Fiat Chrysler and Ford to pay their newer "entry-level" workers less than veteran ones. UAW leaders have said that narrowing the gap between new hires and veterans will be a top issue when negotiations begin with the Detroit automakers this summer. Germany's Daimler AG (DAIGn.DE), for its Mercedes-Benz plant in Alabama, at its only U.S. plant, has the highest U.S. auto labor costs, at an average of $65 an hour. Workers at the U.S. plants of Volkswagen AG (VOWG_p.DE) and BMW (BMWG.DE) earn the least, at $38 and $39 per hour, respectively, according to estimates by CAR. GM, Ford and Fiat Chrysler are the only automakers whose U.S. workers are represented by the UAW. Despite major restructuring since the 2009 recession, GM and Ford still have higher labor costs than their major competitors. The $10 per hour labor cost gap between GM and Toyota Motor Corp (7203.T) translates to roughly $250 a car in additional labor costs for GM, according to data in the study. Some 43 percent of Fiat Chrysler's U.S. auto workers earn the lower entry-level wage, almost double the percentage of such workers at Ford and GM. Of the other automakers operating in the United States, Honda Motor Co (7267.T) workers earned on average $49 per hour, Toyota Motor Corp (7203.T) $48, Nissan Motor Co (7201.T) $42, Hyundai Motor Co (005380.KS) and its corporate stablemate Kia Motors Corp (000270.KS) $41. Per hour labor cost averages include pay for "temporary" workers who are formally employed by outside agencies such as Kelly Services Inc (KELYA.O) but mainly work full-time alongside workers employed directly by the automakers. Japanese automakers have the highest percentages of temporary workers, which cut labor costs, CAR analysts have said. - REUTERS