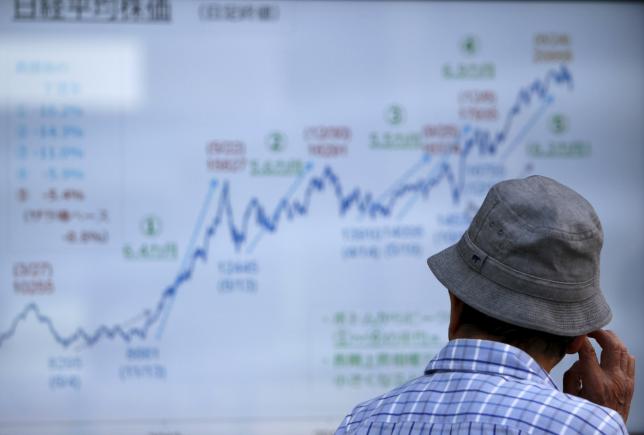 SYDNEY - The U.S. dollar lurched higher on Tuesday as China allowed its yuan to fall to levels last seen in 2012, a shift that could provide a competitive boost to exports for the world's second-largest economy. Asian stocks turned mixed as investors weighed the implications of the surprise move, which seemed to end months of officially sanctioned yuan strength. China's central bank set the midpoint for its currency at 6.2298 per dollar, down from Monday's fix of 6.1162, and said it was aiming for a depreciation of 2 percent. Markets reacted by selling the Australian dollar, often used as a liquid proxy for the Chinese currency. The Aussie sank to $0.7314, compared with $0.7430 ahead of the news. Other currencies in the region also lost ground to the U.S. dollar as investors reasoned they would need to fall to keep exports competitive with China. "As this event has boosted the U.S. dollar and dampened local currencies, it is likely to be welcomed by regional central banks," said Annette Beacher, chief Asia-Pacific macro strategist at TD Securities. "Any policies that boost the outlook for Chinese growth are positive for the growth outlook more broadly." Against a basket of currencies, the U.S. dollar gained 0.4 percent to 97.506. The euro eased to $1.0977, while the dollar firmed to 124.75 yen. Chinese share markets were choppy on the news and eventually turned lower. The CSI300 index was down 0.7 percent, while Shanghai stocks slipped 0.6 percent after scoring hefty gains on Monday. Elsewhere in the region, MSCI's broadest index of Asia-Pacific shares outside Japan lost early gains and was down 0.2 percent. Japan's Nikkei slipped 0.2 percent. Sovereign bond markets seemed to catch a bid from the bout of market volatility and yields on 10-year U.S. Treasuries dipped 3 basis points to 2.196 percent. Sentiment had initially got a lift from a bounce on Wall Street. The Dow ended Monday with gains of 1.39 percent, while the S&P 500 climbed 1.28 percent and the Nasdaq 1.16 percent. Shares in Google jumped more than 5 percent, adding $25 billion to its market value, after announcing a new holding company called Alphabet which will separate the core web advertising business from newer ventures. In commodity markets, the shift in Beijing's currency policy could be seen as a negative in the very near term as a lower yuan makes resources more expensive to Chinese buyers. Three-month copper futures were off 0.7 percent, although that followed a sharp rally on Monday. Oil also eased back from Monday's highs. Brent crude was quoted 41 cents lower at $50.00 a barrel, while U.S. crude eased 44 cents to $44.53. - Reuters