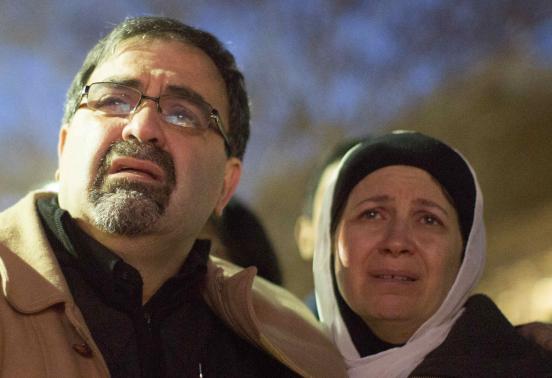 CHAPEL HILL (Reuters) - A gunman who had posted anti-religious messages on Facebook and quarreled with neighbors was charged with killing three young Muslims in what police said on Wednesday was a dispute over parking and possibly a hate crime. Craig Stephen Hicks, 46, a full-time paralegal student from Chapel Hill, was charged with first-degree murder in Tuesday's shootings around 5 p.m. two miles (three km) from the University of North Carolina campus. The victims were newly weds Deah Shaddy Barakat, 23, a University of North Carolina dental student, and his wife Yusor Mohammad, 21, and Yusor's sister, Razan Mohammad Abu-Salha, 19. All were involved in humanitarian aid programs. Students at UNC, where Yusor Mohammad was going to join her husband as a student later this year, gathered on Wednesday for an evening vigil and prayer service. The suspect, in handcuffs and orange jail garb, appeared briefly on Wednesday before a Durham County judge who ordered him held without bail pending a March 4 probable cause hearing. Police said a preliminary investigation showed the motive to be a parking dispute. They said Hicks, who has no criminal history in Chapel Hill, turned himself in and was cooperating. The killings drew international condemnation. The shooting sparked the hashtag #MuslimLivesMatter on social media with many posters assailing what they called a lack of news coverage. "I guess that Muslims are only newsworthy when behind the gun, not in front," tweeted a poster who goes by the handle @biebersrivals. Muslim activists demanded authorities investigate a possible motive of religious hatred. "We understand the concerns about the possibility that this was hate-motivated and we will exhaust every lead to determine if that is the case," Chapel Hill Police Chief Chris Blue said in a statement. Hundreds of people gathered on the UNC campus Wednesday evening for a candlelight vigil for the victims. University and city leaders urged inclusiveness during a time of unease, while a brother of one of the victims called for nonviolence.