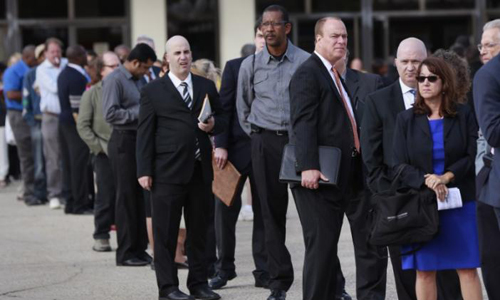 WASHINGTON- U.S. employment growth eased for the third straight month in September and the jobless rate rose, but the slowdown was not expected to prevent the Federal Reserve from raising interest rates later this year.
The Labor Department's report on Friday suggested the economy was on firm ground, but not growing so swiftly as to knock the U.S. central bank off its game plan of raising borrowing costs only gradually. Nonfarm payrolls rose by 156,000 last month, down from a gain of 167,000 in August. The unemployment rate ticked up a tenth of a percentage point to 5.0 percent as more Americans rejoined the labor force. Fed Vice Chair Stanley Fischer, speaking at an event in Washington, said the jobs report was "close" to ideal, showing employment growth was neither too fast nor too slow. When asked whether job creation last month was a "Goldilocks" outcome, Fischer said: "It's pretty close." He did not address the Fed's rate hike plans directly. But his comments seemed consistent with what some policymakers have described as its "base case" - a rate increase at the December policy meeting. A healthy job market could be an asset for Democratic presidential candidate Hillary Clinton in the Nov. 8 U.S. election. She has argued that the Obama administration's policies have helped the economy create millions of jobs. U.S. stocks fell, while prices for U.S. government debt were largely unchanged. The dollar weakened against a basket of currencies, suggesting traders had scaled back bets on a rate increase next month. Rate futures, however, continued to point to a hike in December. 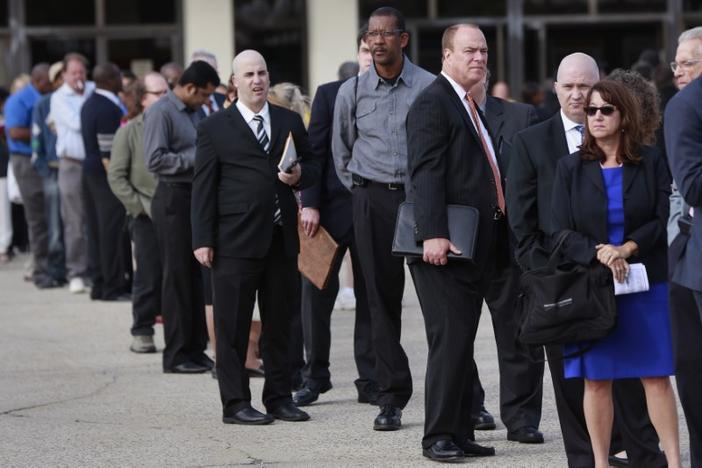 Fed Chair Janet Yellen has said the economy needs to create less than 100,000 jobs a month to keep up with population growth. Average monthly job gains have been about 180,000 this year, which she has described as "unsustainable."
Economists polled by Reuters had expected employers to add 175,000 jobs last month, with the jobless rate holding steady. The government said 7,000 fewer jobs were created in August and July than had been previously reported. Hourly wages for private sector workers rose 2.6 percent in September from the same month a year earlier, in line with expectations. Wage growth has shown signs of accelerating over the last year but remains slower than before the 2007-2009 recession. "It's an economy that is doing okay. It's not necessarily accelerating, but it's certainly doing okay," said Jonathan Lewis, chief investment officer at Fiera Capital in New York. The employment report will be the last before the Fed's next policy meeting on Nov. 1-2. Investors see almost no chance of a rate increase at that meeting given how close it is to the election. Yellen said last month that the Fed will likely raise rates once this year. It lifted its benchmark overnight rate at the end of last year for the first time in nearly a decade, but has held it steady since amid concerns over persistently low inflation. Three Fed policymakers voted for a hike last month when the central bank kept rates steady. However, Friday's data could boost the case of Fed officials who have vocally defended a go-slow approach to rate increases. Republican presidential candidate Donald Trump has accused the central bank of playing politics by holding rates low, a charge Yellen and other Fed policymakers have denied. Trump also has made reversing job losses at U.S. factories a key campaign promise. Manufacturing employment fell by 13,000 jobs in September and the sector has shed jobs in three of the last five months. In a statement, David Malpass, a senior economic adviser to Trump, said the economy continued to fall short in terms of "growth, income, trade and jobs." "Americans desperately need more jobs and new economic policies, not the same-old, same-old offered by the Clinton campaign," Malpass said. In an appearance on CNBC, top White House economic adviser Jason Furman said the data showed the economy on a good path. "We're seeing exactly what we want to see in the economy, which is continued steady job growth, it brings people back (into the labor force), that's driving up wages, and that's a good thing," Furman said. The slowdown in the labor market last month was spread widely, with transportation and warehousing shedding 9,000 jobs and the healthcare and social assistance sector adding only 21,800 jobs, down from 45,300 a month earlier. -Reuters