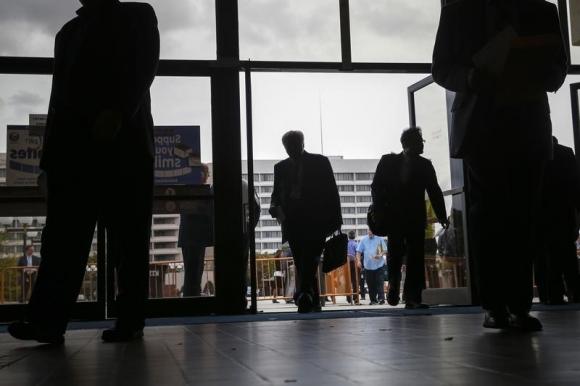 (Reuters) - U.S. job growth likely remained firm in January, with a rebound in wages, supporting views that consumers will have enough muscle to carry the economy through tough times. Nonfarm payrolls probably increased 234,000 last month after advancing by 252,000 in December, according to a Reuters survey of economists. It would be the 12th straight month of job gains above 200,000, the longest streak since 1994. "That would be seen as encouraging given everything that is going on in the rest of the world and would reinforce the notion that consumer spending will remain a key pillar of support for the U.S. economy," said Millan Mulraine, deputy chief economist at TD Securities in New York. The unemployment rate is forecast steady at a 6-1/2 year low of 5.6 percent. The Labor Department will release its closely watched employment report at 8:30 a.m. (1330 GMT) on Friday, a week after the Federal Reserve ramped up its assessment of the jobs market and the overall economy. Sputtering growth in Asia and Europe, along with a strong dollar, appears to have taken some steam off the U.S. economy in the fourth quarter. In addition, a drop in crude oil prices in recent months have led some energy companies to cut back or delay capital expenditures, further hampering growth. Oil prices have fallen about 60 percent since June amid a glut caused by increased production in the United States and weak global demand. There are signs some of this softness persisted into the new year, with most manufacturing sentiment surveys weakening in January. While cheap oil has prompted some energy firms to layoff workers, economists see those job cuts as little more than a drop in the bucket given the size of the U.S. economy. "As of December, oil and gas extraction employment was just 0.18 percent of total private employment, so any disruptions here should not have a major impact on overall payroll growth," said Lewis Alexander, chief economist at Nomura in New York. Instead, the lower oil prices are seen as a massive tailwind for consumer spending, which is also expected to get a boost from a pick up in wages as the jobs market continues to tighten. In January, average hourly earnings are expected to increase 0.3 percent, more than reversing December's surprise 0.2 percent fall, which was the sharpest drop since at least 2006. While several states put in place higher minimum wages last month, economists said the impact would be minimal. According to Michelle Girard, chief economist at RBS, roughly three million workers may have been affected, which would account for just 3 percent of the private sector's 118.4 million employees. Wage gains are seen as the key factor that will determine when the Federal Reserve will starting raising interest rates. "Despite stronger employment momentum, slow wage growth and inflation mean there is no rush to tighten (monetary) policy. The Fed may wait until September," said Thomas Costerg, a U.S. economist at Standard Chartered Bank in New York. With January's report, the government will revise payroll employment, hours and earnings figures dating back to 2010. The government has said the level of employment in March 2014 is likely to be about 7,000 higher than previously estimated. It will also adopt a new population estimate that it will use to adjust the figures from its household survey. That survey is used to determine the number of unemployed and the size of the workforce. In January, private payrolls are forecast rising 225,000. More job gains are seen in manufacturing, but cold weather may have curbed construction payrolls after a hefty increase in December. Retail employment will be watched to see if a sharp December slowdown persisted. Government payrolls are forecast rising 9,000, but are seen as a wild card since they tend to fall in January.