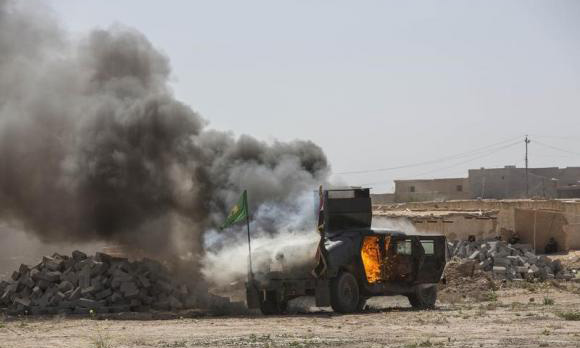 BAGHDAD/WASHINGTON - US-led coalition warplanes launched their first airstrikes against Islamic State targets in Tikrit on Wednesday, officials said, coming off the sidelines to aid Iraqi forces fighting alongside Iran-backed Shi'ite militia on the ground. The decision to give air support to the Tikrit campaign pulls the United States into a messy battle that puts the US-led coalition, however reluctantly, on the same side of a fight as Iranian-backed militia in a bid to support Iraqi forces and opens a new chapter in the war. It also appeared to represent at least a tacit acknowledgement by Baghdad that such airpower was necessary to wrest control of the hometown of former Iraqi dictator Saddam Hussein from Islamic State fighters, after its attempts to go it alone stalled. Iraqi Prime Minister Haider al-Abadi said Iraqi forces would prevail with the support of "friendly" countries and the international coalition, including arms, training and aerial support. "We have opened the last page of the operations," Abadi said on state television. Reuters first reported the US-led coalition's expected entry into the Tikrit campaign, disclosed by Iraq's president in an interview and later confirmed by a US official. It has been carrying out strikes elsewhere in Iraq since August. A US defense official, speaking on condition of anonymity, said American warplanes and aircraft from allied nations were striking up to a dozen targets in Tikrit, selected after coalition surveillance flights. A second US official stressed that Washington in no way would coordinate with the Iranian-backed militia or seek to empower them in Iraq, even if those fighters might share the same narrow tactical objective as Iraqi forces in Tikrit. In language that appeared to intentionally omit the Iranian-backed militia, Lieutenant General James Terry, the senior US commander of the US-led coalition, said the strikes were aimed at enabling "Iraqi forces under Iraqi command." "These strikes are intended to destroy ISIL strongholds with precision, thereby saving innocent Iraqi lives while minimizing collateral damage to infrastructure," Terry said, using an acronym for Islamic State. As coalition aircraft entered the fray, Iraqi forces pounded Islamic State positions in Tikrit, resuming an offensive that had stalled for almost two weeks. Two military officers in the city confirmed Iraqi forces were shelling the militants. "Military operations in Tikrit started at around 9 pm local time by pounding Islamic State positions with artillery, mortars and Katyusha rockets," said provincial council member Hadi al-Khazraji. More than 20,000 troops and allied Shi'ite paramilitary groups have been taking part in the offensive and have suffered heavy casualties on the edge of the city, 100 miles (160 km) north of Baghdad. The Iraqi military had lobbied for U.S.-led coalition air strikes while Shi'ite paramilitary forces opposed such a move. One militia leader, Hadi al-Amiri, boasted three weeks ago that his men had been making advances for months without relying on U.S. air power. The mainly Sunni city of Tikrit was seized by Islamic State in the first days of their lightning strike across northern Iraq last June. If Iraq's Shi'ite led-government retakes Tikrit, it would be the first city wrested from the Sunni insurgents and would give Baghdad momentum for a pivotal stage of the campaign: recapturing Mosul, the largest city in the north. Still, the offensive raised thorny questions for American war planners, who have long sought to distance themselves from the acknowledged risks that heavy involvement of the Shi'ite militia on the ground could heighten sectarian tensions in the Sunni city of Tikrit. It also raises questions about whether the U.S.-led coalition can maintain the extent of operational control of the battlefield that it needs with so many Shi'ite militia on the ground. - REUTERS