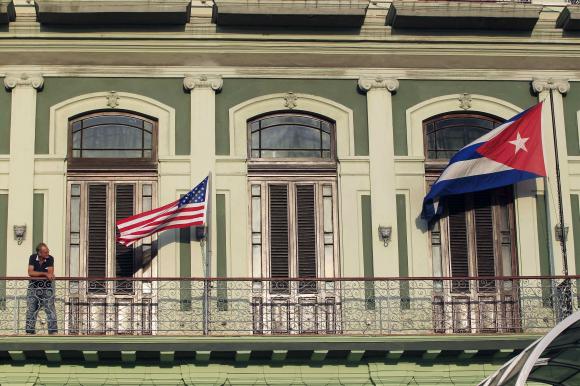 (Reuters) - The United States is pressing Cuba to allow the opening of its embassy in Havana by April, U.S. officials told Reuters, despite the Communist island's demand that it first be removed from the U.S. list of state sponsors of terrorism. A refusal by Cuba to allow the United States to quickly establish an official embassy for the first time in half a century could complicate talks between the Cold War foes, reflecting enduring mistrust as they move to end decades of confrontation. Striking Cuba from the terrorism list could take until June or longer, although the White House is pushing officials to move quickly, said two U.S. officials with direct knowledge of the State Department's review to take Cuba off the list. Washington is eager to re-establish diplomatic ties before a regional summit in Panama in April, when President Barack Obama will meet Cuban leader Raul Castro for the first time since 2013, the officials said. The two leaders announced a historic deal on Dec. 17 to restore relations. U.S. and Cuban diplomats will meet this month or in early March in Washington for a second round of talks. While renewing diplomatic relations could happen quickly, the process to normalize, including removing the U.S. trade embargo, will take far longer. Cuba has not made removal from the list a condition for restoring ties, U.S. officials said. But Havana made clear during the first round of talks last month that it first wants to be removed from the terrorism list. GETTING OFF THE LIST For Cuba, which considers its designation an injustice, getting removed from the list would be a long-coveted propaganda victory at home and abroad. Washington placed Cuba on the list in 1982, citing then President Fidel Castro's training and arming of Communist rebels in Africa and Latin America. The list is short: just Iran, Sudan, Syria and Cuba. But Cuba's presence on the list has been questioned in recent years. The State Department's latest annual "Country Reports on Terrorism" says Cuba has long provided a safe haven for members of the Basque separatist group ETA and Colombia's left-wing FARC guerrillas. But ETA, severely weakened by Spanish and French police, called a ceasefire in 2011 and has pledged to disarm. And the FARC has been in peace talks with the Colombian government for the past two years, with Cuba as host. Even the State Department acknowledged in its report that Cuba has made progress. "There was no indication that the Cuban government provided weapons or paramilitary training to terrorist groups," it said. Cuba raised this issue before January's talks in Havana. A senior official from Cuba’s foreign ministry told reporters on Jan. 20 that it was "unfair" to keep Cuba on the State Department's list. "We cannot conceive of re-establishing diplomatic relations while Cuba continues to be included on the list," the official told reporters, speaking on condition of anonymity. "It doesn't make any sense that we re-establish diplomatic relations and Cuba continues (on the list)." It is rare, though not unheard of, for the United States to remove entities or countries from its list of terrorist supporters. One entity which was removed following a lengthy and intense lobbying campaign was the Mujahiddin e Khalq, a controversial and cult-like Iranian group. The designation also comes with economic sanctions, and can result in fines for companies that do business with countries on the list, such as a record $8.9 billion penalty that French bank BNP Paribas paid last year for doing business with Sudan, Iran and Cuba. As part of the U.S. shift in policy toward Cuba, the White House ordered a State Department review of Cuba's listing as a state sponsor of terrorism, the U.S. officials said. A U.S. national security official said intelligence agencies were under pressure from senior Obama administration officials to complete their role in the removal process by March. "The process is under way," said the official. To finalize Cuba's removal, Obama would need to submit to Congress a report stating Havana had not supported terrorism-related activities for six months, and that Cuba has provided assurances that it will not support terrorism in the future. Cuba would be automatically dropped from the list 45 days later. Getting the embassy open is also tricky. Converting the six-story U.S. interests sections in Havana into a full-fledged embassy after 53 years would require ending restrictions on the number of U.S. personnel in Havana, limits on diplomats' movements and appointing an ambassador. It would allow the U.S. to renovate the building and have U.S. security posted around the building, replacing Cuban police. Cuba also wants the United States to scale back its support for Cuban dissidents when the sides meet again. U.S. administration officials have stood firm both publicly and privately that they intend to keep supporting the dissidents. "I can't imagine that we would go to the next stage of our diplomatic relationship with an agreement not to see democracy activists," U.S. negotiator Roberta Jacobson told a hearing chaired by Sen. Marco Rubio, a vocal Republican opponent of Obama's new Cuba policy.