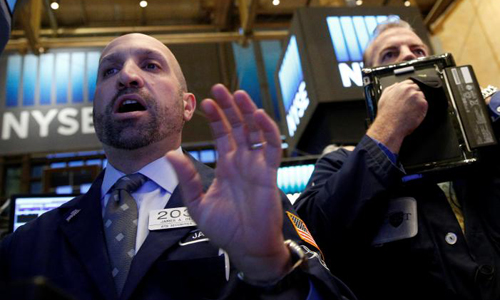 NEW YORK- Wall Street recovered some losses on Friday but still closed lower, with U.S. stocks and the dollar falling after the Federal Bureau of Investigation said it would probe additional emails related to Democratic presidential candidate Hillary Clinton's use of a personal email server while secretary of state.
The dollar slipped against major currencies, including the Euro and the yen, but rose to three-week highs against the Mexican peso. The markets, which have been pricing in a likely Clinton win against Republican candidate Donald Trump, were initially spooked by news that could be an advantage to Trump. Stocks recovered some ground, however, once investors digested the FBI announcement, said Stephen Massocca, chief investment officer, Wedbush Equity Management LLC in San Francisco. "People calmed down and considered what it really meant, that in all likelihood it really isn’t going to impact the election," he said. The Dow Jones industrial average .DJI fell 8.49 points, or 0.05 percent, to 18,161.19, the S&P 500 .SPX lost 6.63 points, or 0.31 percent, to 2,126.41 and the Nasdaq Composite .IXIC dropped 25.87 points, or 0.5 percent, to 5,190.10. The political uncertainty dented the U.S. dollar, which was down 0.56 percent against a basket of major currencies .DXY after earlier hitting an eight-day low of 98.242. The dollar index was set to post a weekly decline of about 0.4 percent. The greenback fell about 0.7 percent against the yen to a session low of 104.49 yen JPY= after hitting a three-month high of 105.53 earlier. The dollar jumped more than 1.3 percent, however, against the Mexican peso to a three-week high of 19.1002 pesos MXN= before paring gains. A Trump victory has been viewed as a key risk for the Mexican currency given Trump's promises to clamp down on immigration and redraw trade relations with the country. Oil prices settled below $50 to mark their biggest weekly loss in six weeks on concerns OPEC will not fully carry out a planned crude output cut, even as data showed U.S. oil drillers removed rigs from production for the first time since June. Brent crude futures LCOc1 fell 76 cents, or 1.5 percent, to $49.71 a barrel, after earlier hitting a session low of $49.31. U.S. West Texas Intermediate CLc1 crude fell $1.02, or 2 percent, to $48.70 a barrel. It hit a low of $48.42. The latest investigation into Clinton's emails also pushed U.S. Treasury two-year note yields US2YT=RR down from five-month peaks to trade flat. Yields on other short-dated U.S. notes were also lower on the day. However, the yield on 10-year Treasury notes US10YT=RR rose slightly to 1.848 percent. Stronger-than-expected growth in the world's biggest economy boosted bets on an imminent U.S. interest rate increase and had earlier sent government bond yields broadly higher. An estimate of U.S. second-quarter gross domestic product showed annualised economic growth of 2.9 percent, the fastest rate in two years. But the boost came largely from a recovery in inventories and a jump in agricultural exports after poor soy harvests in Argentina and Brazil this year benefited sales by American exporters. Meanwhile, business investment in equipment contracted for a fourth straight quarter and personal consumption growth slowed to 2.1 percent from 4.3 percent. Treasury yields were also supported by surging British gilt and German bund yields DE10YT=TWEB. Bond yields have risen recently amid concerns the ultra-easy policies of major central banks could have their limits and may not be continued indefinitely. Europe's index of leading 300 shares .FTEU3 closed down 0.35 percent; Germany's DAX slipped by 0.19 percent .GDAXI and the STOXX 600 fell 0.27 percent. -Reuters