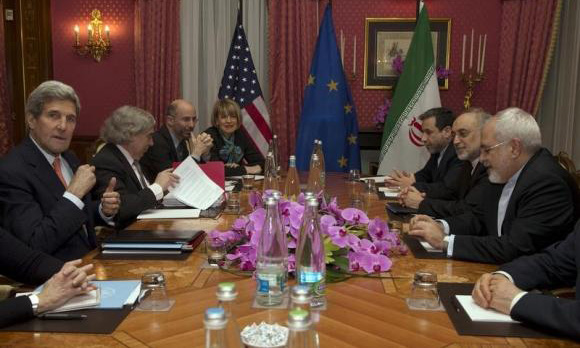 LAUSANNE, Switzerland - The United States wants major powers to reach a detailed political understanding with Iran by March 31 to clear the path for a long-term nuclear accord, a senior US official said, while hinting that Washington could be flexible on its format. Speaking to reporters traveling with Secretary of State John Kerry to a new round of talks in the Swiss city of Lausanne, the senior State Department official added that Washington would not rush to complete an agreement just because there was a deadline. The official said any framework agreement must address key aspects of a future nuclear deal with Tehran that Iran and the six aim to conclude by June 30. "Any political understanding needs to address in some way all of the elements of a final agreement," the official said late on Wednesday. "We do not know what form this will take," the official said. "We have always said it needs to have specifics. We will need to communicate as many specifics as possible in some form or fashion (to the public and US Congress)." Those elements include the different pathways to a nuclear weapon, ensuring that it would take Iran at least one year to produce enough high enriched uranium for a single bomb, research and development into advanced centrifuges, transparency measures and monitoring, and sanctions relief for Iran. This is a problem for Iran, whose supreme leader, Ayatollah Ali Khamenei, is vehemently opposed to the idea of a two-step process - a written framework accord by end-March and a full deal by June 30. Iranian officials say they fear the former would curtail Tehran's negotiating space for a final deal. Iranian officials have suggested they could accept some kind of statement or political declaration in Lausanne, as opposed to a formal written agreement. The disadvantage of that, Western officials say, is all sides could spin it to their liking. Iran denies Western allegations it is seeking the capability to procure atomic weapons. With the Republican-led US Congress threatening to vote on new sanctions against Iran if there is no agreement this month, the administration of President Barack Obama is pushing hard to secure some kind of deal. Obama has vowed to veto any new US sanctions moves. France has said the real deadline was June 30 and there was little point in rushing to conclude something at any cost by March 31. The US official, playing down any suggestions of any ongoing disputes with France, made clear Washington agreed. "That does not mean that we will rush to get a bad deal because there's a deadline," the official said. "We won't." The Lausanne talks broke off last week due to disagreements between Washington and France, Western officials said. But the main obstacle in the talks, Western officials say, remains Iran's refusal to compromise on sanctions, research and development and other issues. It will not be clear if Iran is now ready to compromise until Kerry meets Zarif on Thursday, the US official said. If enough progress is made this week, other foreign ministers the six power group may join. The goal of the talks, underway for nearly 18 months, is to hammer out an accord under which Iran would halt sensitive nuclear work for at least a decade in exchange for lifting sanctions, thus ending Iran's 12-year nuclear standoff with the West. Even if there is a deal in the coming days, the US official said much work will remain between now and the end of June to work out the details. And there was no guarantee the talks would not collapse later. The six powers and Iran have twice extended talks on a long term accord after missing deadlines in the wake of an interim agreement struck in 2013. It remains unclear what Washington will do if the two sides fail to get a framework agreement in the coming days. "If we get to March 31 and don't have a political understanding, we will have to evaluate where we are," the US official said. "We will have to look at what we think the path forward is and we will make decisions based on that." –Reuters