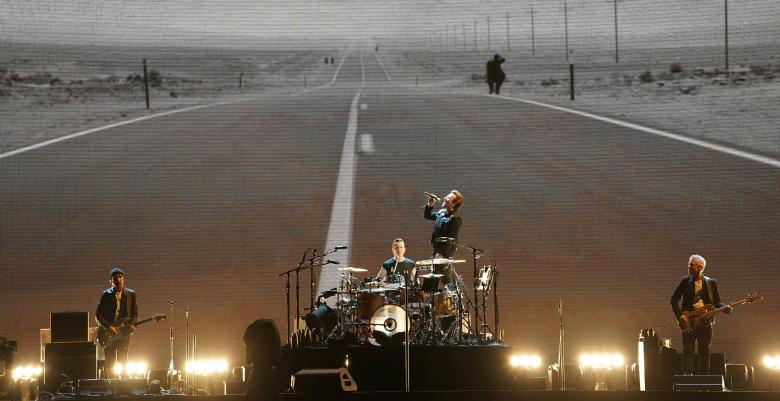 SEATTLE – With evocative montages of the American west scrolling on screens behind them, Irish rockers U2 kicked off the U.S. leg of their "Joshua Tree" tour on Sunday with a few jabs at the new political landscape.

The tour was billed as a look back at the band's 1987 breakthrough album "The Joshua Tree" with its globe-spanning hits "With Or Without You" and "I Still Haven't Found What I'm Looking For."

U2 started with one of their even earlier songs, "Sunday Bloody Sunday" and its opening lines "I can't believe the news today", before roaring through "New Year’s Day", "Pride", and the whole Joshua Tree LP played in the order of its tracklist.

Bono largely steered clear of the overt references to President Donald Trump that had peppered his performances during the election campaign. But more guarded references to modern-day events kept breaking through.

"Some of you think that the dream is dead. Maybe that dream is just telling you to wake up," Bono said during "Pride," as the words of Martin Luther King were projected behind him.

The screen switched to images of models in front of a faded American flag and vast desert landscapes.

Other scenes showed the destruction in Syria and a girl there appealing for help.

Speaking about the band's charitable organization One, which fights poverty, Bono urged the crowd to "organize" for change.

"Nothing scares ... politicians like people getting organized. That's how it should be, the government scared of the people, not the other way around," he said.

The lead singer gave a shout out to Bill and Melinda Gates, who were both in the sold-out audience at Seattle's CenturyLink Field venue, hailing them as "luminary figures" for their charitable work.

Pearl Jam frontman Eddie Vedder, joined the band on stage for "Mothers of the Disappeared", the last track on The Joshua Tree's flipside.

The band saved more recent hits for the encore, belting out "It's a Beautiful Day" and "Elevation" as Bono called on women to "unite to rewrite history as her-story".

Bono also acknowledged U.S. Mother's Day on Sunday, dedicating the song "Ultraviolet" to "women who stood up or sat down for their rights, who insisted, resisted, persisted for their rights."

U2 will play 33 shows to 1.7 million people during the "Joshua Tree" tour. The tour is also the top-selling concert in the US this summer, according to ticket seller StubHub, with most shows already sold out. –Reuters