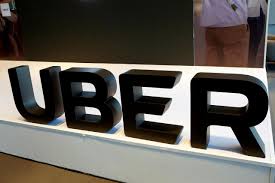 BERLIN (Reuters) – Uber, the ride-hailing company which has been banned from many European cities, is about to launch its JUMP electric bicycle sharing service in Germany as it diversifies and seeks to build bridges with local authorities. Uber’s Chief Executive Dara Khosrowshahi made the announcement at a conference in Berlin as dozens of German taxi drivers outside waved placards that read “Uber go Home”. “I want this to signal a deep commitment to Germany,” Khosrowshahi said, arriving on stage with a bright-red JUMP bicycle. “Germany is a little bit of a signal of what the new Uber can be like... We want to work with local governments and cities to make our model work.” Uber has faced a rough ride in Europe, where protests by traditional taxi drivers have in the past turned violent and court bans have forced it to shut down some of its services, including in Germany, France, Italy, Spain and Belgium. Additionally, Uber and other ride-hailing app-based companies have been accused of causing congestion in major cities like London. Uber bought the JUMP start-up as part of a bid to become the go-to app for urban transport, be it buses, bikes, cars, or even trains, allowing people to book trips across a range of services. Its dockless electric bike has already been rolled out in San Francisco, where there are 250 bikes, and Washington. After sweeping through China, bike-sharing has spread to Europe and North America, with US players seeking to keep pace with the international forays of Chinese rivals. Berlin has been swamped with brightly-colored bicycles in the last year, including from China’s Mobike and Ofo, and U.S. start-up LimeBike, with the authorities now trying to regulate the number of bikes as they block sidewalks and are dumped in parks. Khosrowshani said Uber wants to bring JUMP to Berlin by the end of the summer and launch in other European cities in coming months. It will also start a fully electric Uber Green service in Berlin later this year, following its launch in Munich. “Uber stands ready to help address some of the biggest challenges facing German cities: tackling air pollution, reducing congestion and increasing access to cleaner transportation solutions,” he said. Uber is currently fighting a decision by London’s transport regulator to strip it of its license after it was deemed unfit to run a taxi service and has started sharing data about its millions of trips with the authorities to try to fight congestion. Since taking over in August, Khosrowshahi has been trying to improve the image of Uber, which has been rocked by management turmoil and tarnished by revelations about an alleged sexist workplace culture tolerant of chauvinism. “I didn’t have to convince the company that the macho culture was wrong, everyone at the company knew it,” he said. He said he recognized that Uber’s mission to “democratize mobility” could hurt some people: “When you’re changing traditions, there are constituencies you may anger,” he said, adding that he might try to talk to the taxi driver protesters.